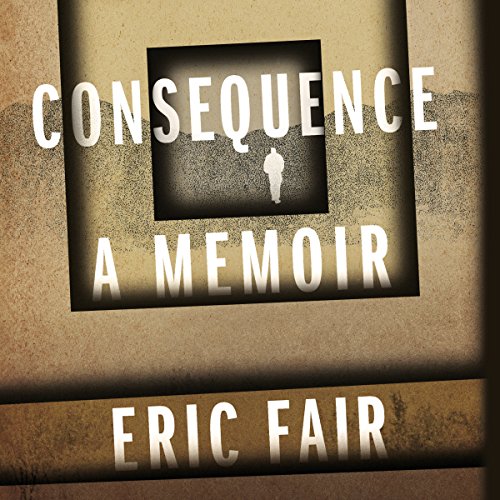 A man questions everything - his faith, his morality, his country - as he recounts his experience as an interrogator in Iraq; an unprecedented memoir and "an act of incredible bravery" (Phil Klay).

"I tell Karin there will be consequences for making my Iraq experience public. I say, 'People aren't going to be happy.' She says, 'As long as you think it's the right thing to do....'" (from Consequence)

Consequence is the story of Eric Fair, a kid who grew up in the shadows of crumbling Bethlehem Steel plants nurturing a strong faith and a belief that he was called to serve his country. It is a story of a man who chases his own demons from Egypt, where he served as an army translator, to a detention center in Iraq to seminary at Princeton and, eventually, to a heart transplant ward at the University of Pennsylvania.

In 2004, after several months as an interrogator with a private contractor in Iraq, Eric Fair's nightmares take new forms: first there had been the shrinking dreams; now the liquid dreams begin. By the time he leaves Iraq after that first deployment (he will return), Fair will have participated in or witnessed a variety of aggressive interrogation techniques, including sleep deprivation, stress positions, diet manipulation, exposure, and isolation. Years later, his health and marriage crumbling, haunted by the role he played in what we now know as "enhanced interrogation", it is Fair's desire to speak out that becomes a key to his survival.

Spare and haunting, Eric Fair's memoir is both a brave, unrelenting confession and a book that questions the very depths of who he and we as a country have become.

This audiobook includes a conversation between the author and Phil Klay, author of Redeployment.

"Remarkable.... Both an agonized confession and a chilling expose of one of the darkest interludes of the War on Terror. Only this kind of courage and honesty can bring America back to the democratic values that we are so rightfully proud of." (Sebastian Junger)

What listeners say about Consequence

An honest and frank discussion

What does Eric Fair bring to the story that you wouldn’t experience if you just read the book?

I really liked that Eric Fair read his own story. I think it worked well with his writing style, and this was a story I definitely wanted to hear in his own voice. I'm not sure simply reading the book would have had the same impact.

Eric Fair wrote an Op-ed piece in the New York Times a little over a year ago, the day the Senate released its torture report. At the end of the piece he says "Most Americans haven't read the report. Most never will. But it stands as a permanent reminder of the country we once were." He says in the future students will be assigned portions of the Senate torture report, and "[t]he students will come to know that this country isn't always something to be proud of."

I think this memoir serves as a very similar reminder. Fair does not feign innocence in this book. He is by his own admission a torturer, having served as a contract interrogator at Abu Ghraib prison in Iraq during the same time the photographs were taken showing abuse of the detainees. He is frank and honest about the things he had knowledge of and the things that he participated in. What I found so important about this book, was that Fair could have easily let himself off the hook. He did not take part in interrogation at the "hard site" in Abu Ghraib, he did not take part in the photographed abuse, he never participated in water boarding. Everything he did was legal. But to Fair there is no distinction, the terms "enhanced interrogation" and "approved techniques" are just other words for torture.

Fair does not try to justify his actions or debate the effectiveness of the techniques. Instead this is a story of a man trying to come to terms with his actions. To accept that he may not believe he is worthy of forgiveness, and figure out how to move forward in his life. Fair's honest portrayal of events is an important read as we as a country must evaluate our actions. At a time when a presidential candidate advocates for water boarding, as a country we must evaluate what we are willing to justify during times of war. Neither Fair nor anyone from CACI were ever prosecuted. They "tortured people in the right way". This book forces the reader to acknowledge the abuse that occurred and ask if these consequences are we are willing to accept in the name of national security?

There is always a price to be paid for every choice. This is a sober examination of one person's experience of the horror of war... with the corruption of soul that can infect even the most innocent or apparently intelligent or well intentioned person.

Eric Fair did a great job reading this book. This book has a great pace. I found it engaging. I feel now that I have a greater and deeper understanding of the war in Iraq and the men and women that come backs with PTSD.

Eric Fair writes with a gravitas and deep understanding of a Christian ethos that sets him apart from other recent memoirists who seem to equate hard work with existential success. Fair will not look away from human frailty and our innate capacity for cruelty which drives us to seek a Gif we need, but cannot understand.

A book that brings great sadness

It is sad that someone so bound up in religion could find themselves failing to stand up for those that were so clearly abused. It also shines a light on a particularly nasty part of America; that our lofty claims and aspirations to take the moral high ground are a cover for actions that make us despised by all those whose freedoms we have trampled, discarded, or destroyed.

This is a phenomenal human story although the writing tended to be a bit staccato. I would certainly recommend this book to anyone interested in what occurred in Iraq and how torture affects not simply the person who was tortured but also the person who inflicted the torture on another human being. All in all this was an excellent story and I'm thankful that I listened to it.

Rehabilitation for the soul

I hope this story has a more profound effect on our recovery from the darkest part of our history since WWII. Ironic how his most productive interrogation session was earned with Coca Cola and birthday cake and not from the Palestinian chair.

Fair is bitingly honest and serious about dismissing self-delusion. I wish I could say the same about our leaders.

Sad, desperate story with NO RESOLUTION.

CONSEQUENCE by Eric Fair
is a sad, discouraging tale of a man trying to deal with guilt.
Fair often mentions his Christianity;
but never seems to have an understanding of Christ's willingness & ability to forgive.
He quite openly & explicitly confesses his sins against men: torture, anger, pride, selfishness &c. &c......
He clearly exposes the futility & evil of torture & how it is un-American & ungodly;
how it ruins, not only the lives of those tortured, but ruins the lives of the torturers.
The memoir is really sad because he is still living with guilt;
attempting what he knows is impossible, to resolve/fix/atone for his sin.
A sad, desperate story with NO RESOLUTION......
A "christian" who doesn't seek Christ's glory, mercy, forgiveness & restoration.......
He'd rather remain a godless, selfish, suicidal drunk.......
(Fair uses a lot of coarse, foul language,
as I guess one might expect in war & from one who tortures people for a living.)