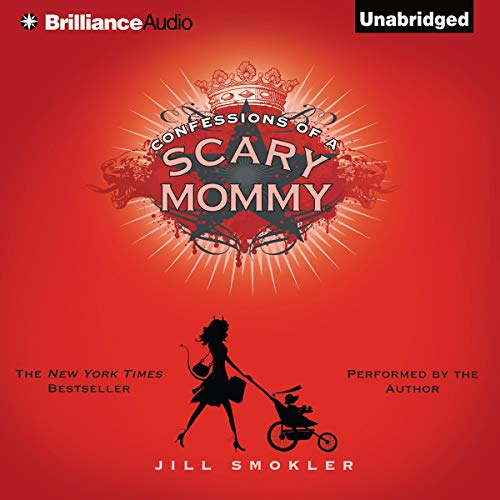 Confessions of a Scary Mommy

Sometimes I just let my children fall asleep in front of the TV.

In a culture that idealizes motherhood, it’s scary to confess that, in your house, being a mother is beautiful and dirty and joyful and frustrating all at once. Admitting that it’s not easy doesn’t make you a bad mom; at least, it shouldn’t.

If I can’t survive my daughter as a toddler, how the hell am I going to get through the teenage years?

When Jill Smokler was first home with her small children, she thought her blog would be something to keep friends and family updated. To her surprise, she hit a chord in the hearts of mothers everywhere.

I end up doing my son’s homework. It’s wrong, but so much easier.

Total strangers were contributing their views on that strange reality called motherhood. As other women shared their stories, Jill realized she wasn’t alone in her feelings of exhaustion and imperfection.

But she sensed her readers were still holding back, so decided to start an anonymous confessional, a place where real moms could leave their most honest thoughts without fearing condemnation.

I pretend to be happy but I cry every night in the shower.

The reactions were amazing: some sad, some pee-in-your-pants funny, some brutally honest. But they were real, not a commercial glamorization.

I clock out of motherhood at 8 P.M. and hide in the basement with my laptop and a beer.

If you’re already a fan, lock the bathroom door on your whining kids, run a bubble bath, and settle in. If you’ve not encountered Scary Mommy before, break out a glass of champagne as well, because you’ll be toasting your initiation into a select club.

I know why some animals eat their young.

In chapters that cover husbands ("The Biggest Baby of Them All") to homework ("Didn’t I Already Graduate?"), Confessions of a Scary Mommy combines all-new essays from Jill with the best of the anonymous confessions.

Sometimes I wish my son was still little - then I hear kids screaming at the store.

As Jill says, “We like to paint motherhood as picture perfect. A newborn peacefully resting on his mother’s chest. A toddler taking tentative first steps into his mother’s loving arms. A mother fluffing her daughter’s prom dress. These moments are indeed miraculous and joyful; they can also be few and far between.”

What listeners say about Confessions of a Scary Mommy

Would you listen to Confessions of a Scary Mommy again? Why?

This book was great, it made me feel much better knowing that there are so many moms (or maybe all moms) that are so much like me in my struggles to be a good mom, keep a sense of self and juggle everything else life throws at us.

Caution: Do not listen to this while you're in the car with your kids ;)

As a mom, I have days that I feel sub-par. I have days where I feel like everything I do is wrong, and that I'm the worst mother in the world. As I listened to this audiobook, I realized that there are so many women who feel the same way I do. Mrs. Jill Smokler is a genius! I laughed, I cried, and I learned to not be so hard on myself. Two thumbs WAY up!

This was just moms having a vent. There were maybe 4 essays I liked, nothing groundbreaking, no mom hacks or pro tips. It just painted the author in a bad light, but worst of all were the commenters at the start of each chapter. It just goes to show, when it comes to the internet DON’T REAS THE COMMENTS! (This is a review, not a comment😂)

If you read this book and feel like these are your people, awesome. It’s good to know one is not alone. Next I suggest reading “Bringing up Bebe” for some interesting ideas that may get you a little more space and time to get back to your pre-mom self.

I only finished this because I think it’s too late to return or exchange it and because audible have a promotion on - if I finish 3 books by March something I get $20. It’s one way to get a refund on this book. 😂

In the midst of a partial “pre-post-partum” depression I sought out books to help me get my mind back on track. How to be a better person. Most importantly, how to be a better mom to the kids I have already. I’ve read book after book looking for the answers as to what I’m doing wrong. This book is going to show you that you’re not doing anything wrong at all!! On the contrary, you’re doing it all just fine. Every day isn’t going to be perfect and most of the time, we don’t know what the heck we’re actually doing. This book gave me a sense of okayness; it’s okay not to be a “perfect mom”. You are perfect to your kids even on the bad days!

I thought that this book would be funny, but it's not funny. This is not really even a book, just a bunch of random, whiney complaints from moms.

A few laughs, but not recommended

While I did enjoy a few laughs, it really isn't a book I would recommend. I think what I enjoy about laughing with other moms about the craziness of parenthood is following that up with some form of encouragement and edification. This book is missing the positive spin; it is for those who love sarcasm and aren't easily offended by the F bomb.

Oh my gosh, have we all lost it?

A book about real motherhood with a comedian aspect. This book insulted my intelligence on a level that almost made me angry.

Has Confessions of a Scary Mommy turned you off from other books in this genre?

She sounded so odd, brilliantly annoying, just like the book.

Anger/dissapointment maybe shock that this crap gets published?

Don't waste your money. If you are a mom you do not need this book you know it all already. And it almost insults women to be honest. I hated it!

boring. we get it....parenting is hard. better as a website and not an entire book

While being pregnant as I hit the last few weeks of my pregnancy I started to worry about things like still loving my puppy, how my body would survive labor, how I would survive motherhood, I decided to read Scary Mommy after seeing someone post the Scary Mommy Manifesto on FB. This book has made me feel SO MUCH BETTER!!!! It's nice to know that other women out there felt/feel the same way I do. I didn't feel like I could talk to my friends or family with the way I was feeling I didn't think they would understand, but this book pretty much hit all of the anxieties and fears I had, made me laugh, and definitely made me feel like I would survive all the things motherhood would bring! I would recommend this to ANYONE who is pregnant, and as a laugh to any mommy out there. If you are gonna get something for the momma to be in addition to baby stuff for a baby shower GET THEM SCARY MOMMY, and don't forget to pick up a copy for yourself.

If you like your children and enjoy being a mother, don't read this

I didn't find anything particularly funny in the book at all. It is all actually quite depressing. It took about 3hours before she acknowledged that she actually did liked her children - sometimes.
I know being a mother can be challenging, but if you don't want the challenge, don't have children; it is a choice.
Sometimes when my daughter is doing something that irritates me, I take a deep breath and think how terrible it would be if something happened to her and she wasn't around any more to do the silly irritating thing.
Children are so often a function of their environment. If they are running a muck, perhaps some mothers need to look at themselves first before they say how terrible and dysfunctional their kids are.
Kids need disciple, routine, and most of all, unconditional love. It is all of their naughtiness, irritating ways, sneakiness, cheeky grins etc that make them so perfect.
If you don't want the bad, you never get to have the wonderful, amazing and satisfying good.
They're kids. When you get a puppy, you know it is going to pee on the floor; you expect it and mop it up. You know if you leave the door open, it will run away. So what do you do? You close the door. Why do so many people accept the mishaps of a puppy, but not a child? Why do so many of these mothers expect their children to act like adults? If you don't want the pee and the frustrations, don't have them. It is a choice.