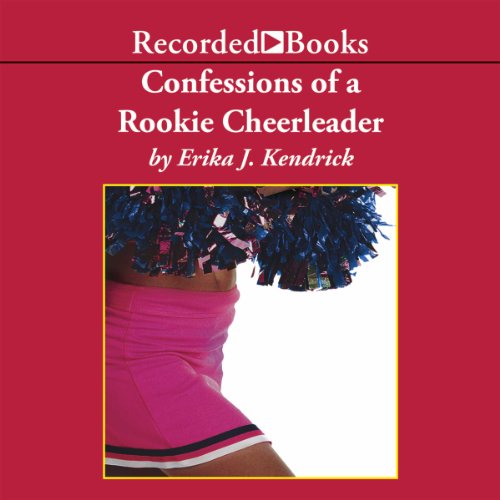 Confessions of a Rookie Cheerleader

Confessions of a Rookie Cheerleader

After Hannah's fiancé is caught cheating, she leaves him to pursue her cheerleading dream, while still working at RockStar Records. Hannah will have to deal firsthand with Cheerleader Rule #1: don't fall in love with a player.

Author Erika J. Kendrick is no stranger to the record industry or the world of professional cheerleading; she was once a Chicago Bulls cheerleader and she's worked at Island Def Jam. Here, Kendrick turns that background in to a spicy debut novel.

"Snappy dialogue and steamy love scenes fuel the buildup to a bombastic ending that will satisfy romance fans." ( Publishers Weekly)

What listeners say about Confessions of a Rookie Cheerleader

A story that actually delivered what the title promised, an editor for the author, a better narrator and/or a director, producer, or editor for the narration.

What was most disappointing about Erika Kendrik’s story?

The book was titled

Would you be willing to try another one of Susan Spain’s performances?

No way. Her performance was just okay. The thing that made her unbearable was the saliva sounds. You can hear her mouth smack when she opens it and the saliva bubbles crackling and popping. It's gross. She sounded like she'd been eating honey and pop rocks. I can't believe they let that go. I also hated the way she announced the next chapter. As the book went on, she gets worse and I wished there were no more chapters for her to say (or me to hear).

Disappointment. It was just a pathetic effort overall. Big letdown.

This was the author's first book and I That being said, that was not an excuse for a misleading title, poor story execution, and bad narration. It seemed like the author grew up with nothing (like the main character) and decided to write a book obsessing about name brands after achieving a little success. I mean, did she really have to say

All fantasy no reality

I guess this would be a great story had I been looking for a romance. I bought this thinking that I would actually be getting an little peek inside the life of an NBA cheerleader and I was mistaken and left disappointed. What I got was a bunch of designer name dropping, over use of adjectives and run on sentences.
It would really help if the narrator didn't have that annoying lisp and didn't pronounce her r's like w's. She sounded a lot like Elmer Fudd.

The flow was disturbed often because they were very long awkward pause it from one shop to another. So long where are you weren’t sure if the audio had stopped playing. And then there were other chapters where one chapter abruptly ended and started to the next one. It was very jarring.

The storyline was awesome. This was a book that sparked my interest from the beginning. My only issue was all the dead air and extremely long pauses throughout the entire book. The narrator's time and pitch was good she just inserted what seemed to be unnecessarily long pauses in the middle of conversations and chapters. At one point I thought the book froze or my app kicked me out of play mode, the dead air was so long. Other than that, I would definitely recommend this book.

I can hardly believe this is the authors first book. It gave you peeks into so many corners of entertainment, while adding steam and romance. Loved it.