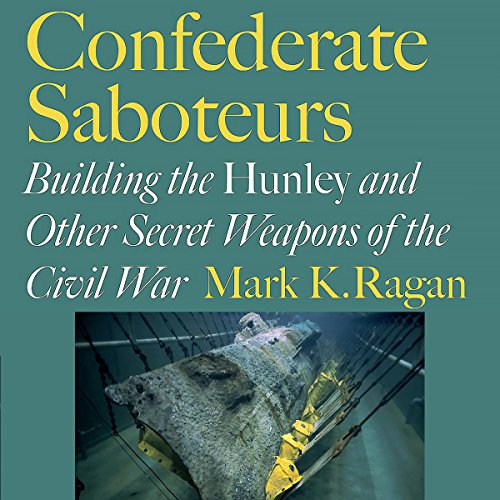 Facing an insurmountable deficit in resources compared to the Union navy, the Confederacy resorted to unorthodox forms of warfare to combat enemy forces.

The group's main government-financed activity, which eventually led to other destructive inventions such as the Hunley submarine and behind-enemy-line railroad sabotage, was the manufacture and deployment of an underwater contact mine. During the two years the Singer group operated, several Union gunboats, troop transports, supply trains, and even the famous ironclad monitor Tecumseh fell prey to its inventions.

In Confederate Saboteurs: Building the Hunley and Other Secret Weapons of the Civil War, submarine expert and nautical historian Mark K. Ragan presents the untold story of the Singer corps. Poring through previously unpublished archival documents, Ragan also examines the complex personalities and relationships behind the Confederacy's use of torpedoes and submarines.

"Nonfiction at its best." (Clive Cussler, American adventure novelist and founder of the National Underwater and Marine Agency)
"A skillfully crafted in-depth study of a very difficult subject to research, Confederate Saboteurs is an important new addition to the naval and covert operations histories of the Civil War." ( Civil War Books and Authors)
"This is a great book about the Civil War and unconventional warfare. If you are a military or naval historian, you need to read this book." ( The Journal of America's Military Post)

What listeners say about Confederate Saboteurs