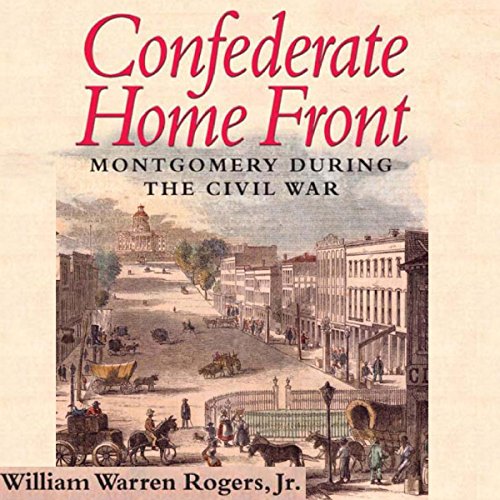 Drawing from a wealth of historic documents and personal papers, William Warren Rogers, Jr., provides a fascinating and detailed political, economic, social, and commercial history of Montgomery from 1860 to 1865. His account begins with an examination of daily life in the city before the war began - how slaves outnumbered whites, how an unvarnished frontier atmosphere prevailed on the streets despite citizens' claims to refinement, how lush crops of corn and cotton grew in fields right up to the city limits, and how class divisions were distinct and immovable.

Rogers arranges his material topically, covering the events that led to the decision for secession and Montgomery's heady days as the Confederacy's first capital; the industrialization of the city's war effort as it became a hub of activity and served as a military post; the city's business patterns and administration as it attempted to promote the Confederacy and defend itself from federal forces; and the plight of the small group of Unionists who inhabited Montgomery through the war. Rogers concludes with chapters examining the situation in Montgomery as the Confederacy unraveled and the city fell to Union troops.

"An admirable presentation of one Southern town's sojourn through the war, this is a valuable contribution to the field." ( American History)
"An engaging account of Montgomery, AL, as the Confederacy's first capital and major rebel subsistence depot and railroad nexus...crisply written, appropriately illustrated, and painstakingly researched." ( Library Journal)
"Rogers' work is superbly written, meticulously researched, and concisely argued." ( Civil War Regiments)

What listeners say about Confederate Home Front: Montgomery During the Civil War