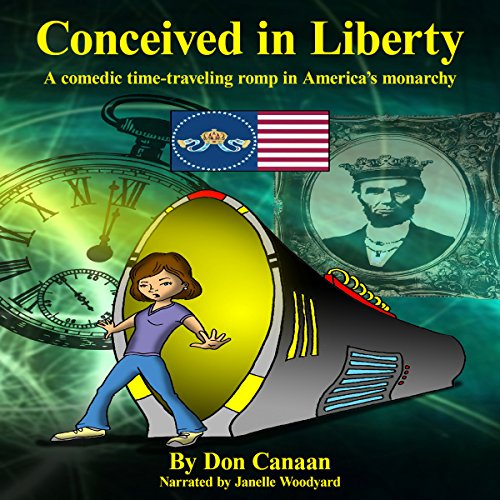 By: Don Canaan
Narrated by: Janelle Woodyard
Try for $0.00

In 2063, archaeologists discovered a hermetically-sealed box containing a memoir, a birth certificate for a child named Mobius (father unknown), and a male chastity belt.

What if a fate worse than a catastrophic virus threatened our lives in the American monarchy founded by Benedict Arnold after defeating George Washington's ragtag revolutionary army? Arnold referred to the then-British puppet nation as the Union of Royal American States.

In 2063, the ruler of the URAS was Queen Alyssa, whose family descended from Benedict's distant cousin, King Abraham I. Monarchs usually ascended to the throne by murdering a previous ruler. And so, Alyssa had killed her father, who had inherited the throne from King Donald.

The paranoid queen suffered from nightmares. Undocumented aliens from another planet were breaching King Donald's sky wall and were trying to usurp her throne and enslave her subjects.

In this comedic, sci-fi, time-traveling romp through history, the queen asks a young scientist, Tamar Weaver to travel into the past and repair the fabric of time so that Alyssa's reign could continue unhindered.

During Tamar's 1863 adventure in the royal capital of New York City, she experiences events that she believes caused the rip in time.

Changing fate is not so simple for Tamar. She encounters historical figures in non-whitewashed situations, never before documented in history books.

Traveling into the past causes Tamar to become 17 years younger. Her journey becomes fraught with assassination, sex, and a transformed life as the mother of monarchs.

The mind-boggling plot concludes with an ending that the listener could never imagine; a conclusion that only could be imagined in the Twilight Zone.

Additional information can be found at TimeWeaverMedia.com

What listeners say about Conceived in Liberty