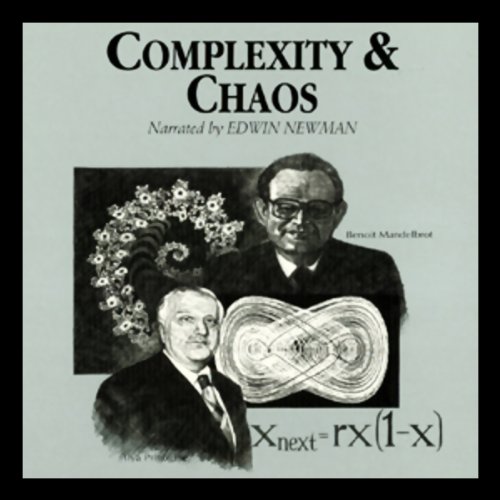 Newtonian physics described a regular, clock-like world of forces and reaction; randomness was equated with incomplete knowledge. But scientists in the late 20th century have found patterns in things formerly thought to be "chaotic"; their theories help explain the unstable, irregular, yet highly structured features of everyday experience. It now seems likely that randomness and chaos play an essential role in the evolution of the living world and in intelligence itself.

The Science and Discovery series recreates history's 4,000-year journey to better understand the world through scientific means. Scientific discovery has often disrupted conventional wisdom. This is a story of vested interests and independent thinkers, experiments and theories, change and progress.

What listeners say about Complexity and Chaos

Gotta balance the other review. This was good.

There is a lot of information in this. I listened several times, gaining something new each time.

The "actors who employ various hokey accents" bugged me, like the previous reviewer, until I found out at the end that at least one of the voices was actually Ilya Prigogine, the Nobel Prize winning physical chemist who discovered much of the content. I was honored to have that voice.

There is a lot of information in this book. It bounces around many disciplines, attempting to weave biology, chemistry, physics, philosophy, and economics together to show common threads. This is tough to do and tough to digest. For me, it was worth it. I have to give it a five to balance out the previous reviewer's 1. I almost didn't get this because of that review. That would have been a shame.

I couldn't listen to this book for more than 15 minutes. It characterizes "regular" science as unwaveringly Newtonian and Euclidean in order to set fire to an imaginary scientific straw man that never existed. The author apparently wants to clear the way for a supposedly much better science of complexity and chaos. The science of complexity and chaos doesn't need this kind of special pleading; please give me a book that explains chaos theory without all the slah and burn! The ahistorical attitude that "science used to be so rigid but now at last it's getting good" shows an ignorance of BOTH science and history.

And one more thing before I go delete this waste-of-space from my iPod. The author uses a lot of quotes from various scientists to illustrate his ideas - a technique I like - but the audiobook editors of this version insist on having these quotes read by actors who employ various hokey accents (gutteral Germanic intonations, suave fake-French pronounciations, Masterpiece Theater Britspeak, etc.). This is a terrible distraction and only further frustrated me as I attempted to plug away at this book.

If you want a good general explanation of complexity and chaos, look elsewhere.

Very interesting book but I hate the narration

A lot of very interesting topics for further thinking and discussing but I really hated this stupid accent acting. Why? Neither topic or deepness of the book invites for these cartoonish parodies

Loved every minuite of it

Over the past two months or so I've been getting into complexity science and have been looking for a resource like this, it hit the spot for me!

Great overview of the field, I wish they elaborated more on some topics. Unfortunately I can't find a way to buy the text of this audiobook.. It'll make it easier to follow with the interesting ideas presented

The voices they used add absolutely no value to the information presented and are extremely annoying. I could not even finish listening due to the annoyance factor. If this were a fiction story I might be able to understand why they did it. I'm sure someone thought it would be cute to try and mimic the accents of the scientists but it ends up just being distracting. I listen to a book about science to get a presentation of the science not to hear some voice actors attempt to mimic an extreme accent. The words are almost unintelligible.

Important information for all

Rich material well told and written. Only quibble was didn’t care for the “accents” attributed to the author being quoted. Over-all excellent!

Constantly attack physicists without any evidence

The author continually makes claims about how scientists avoided any complex questions, like how a tornado forms, or how a human is formed from two cells. These claims are made many times throughout, without a even a single bit of evidence to support these attacks.
I don't know the author seems to hate scientists so much, but it makes it very difficult to get through the book.

Short but informative account of the fascinating balance between complexity and chaos in everything. Very thought provoking

The life long reevaluation of one's learning and understanding of not only the present and past but all points of observation and experience physical and meta-phisical as they occur and pass into conscious memory of function and experience and there in increasing understanding, the pure objective of the sentient being.
Tom O'Rourke 1953....?

Nice introduction to the topic. The narrator must have been engaging because I rarely listen to books to the end!

I thought it was a very nice book

I thought it was a very nice book. I am unsure why all the bad review. It definitely open my mind.