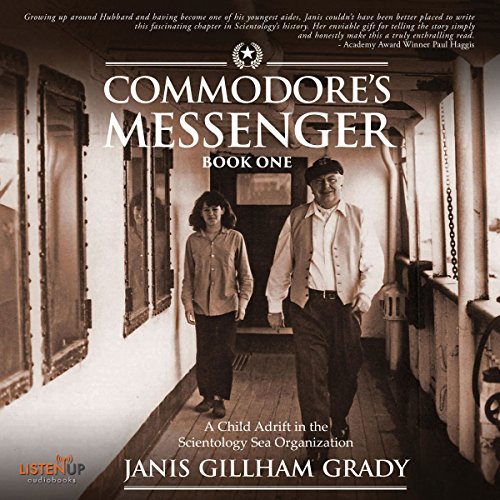 By: Janis Gillham-Grady
Narrated by: Jennifer Moore
Free with a 30-day trial

At age 12, Janis was thrust into a role that no one, not even L. Ron Hubbard, could have predicted.

Commodore's Messenger begins by taking the listener into the life of the first family of Scientology in Australia: Yvonne and Peter Gillham and their three children, Peter Jr., Terri, and Janis. Life for the Gillhams is not without its challenges in Australia, but nothing compares to what happens when the family moves to England after dealing with the banning of Scientology in Victoria. Things spiral out of control, as Hubbard leaves England and takes to the sea to continue his spiritual research for mankind, as he puts it, or to escape the long arm of the law, as many critics contend.

Yvonne and her children soon find themselves enmeshed in Hubbard's inner circle: Yvonne, as one of his trusted aides, and the children, with Hubbard's own family. When Yvonne joins the newly established Sea Organization to support Hubbard in his seafaring adventures, her children find themselves aboard what would become the flagship of Hubbard's burgeoning navy.

Having children underfoot does not fit well with the serious nature of Hubbard's plans to expand Scientology's worldwide. Determined to make these children useful, he begins using them to send messages to various parts of the Apollo, hence the name Commodore's Messenger.

With this as a background, Janis' story comes from the earliest days and the epicenter of Scientology's Sea Organization. As a messenger, Janis was with Hubbard a minimum of six hours a day and often times, much longer. She was privy to all his moods, from sunny to thundering and was intimately familiar with everything happening on board the ship and the Scientology network.

Janis lived a life that few of her peers could ever hope to have lived. Hubbard's cavalier regard for the lives of others was astonishing. The Sea Org. vessels were piloted by those with so little seamanship training, it's a wonder no one was killed.

What listeners say about Commodore's Messenger

You Can't Make This Stuff Up.

This story is hilarious, disturbing, fascinating and engrossing. It was the 1960's and people cut loose. The enforcement of scraping for food and shelter eased and people were free, for a brief moment, to rise above economic enforcement and become curious about the spiritual and supernatural. Some laid around Golden Gate Park in San Francisco, smoking weed, some took to the high seas with L. Ron Hubbard, the founder of Dianetics and Scientology. Many, took their children along, or had children and then disposed of them to the care and control of others. The child neglect was obscene. They were wholly denied identities as "children", which is a valid identity. The "child" identity was discounted and given zero value. Tales of these children's oppression (alive or dead) abound on the Internet and this is not the first book I read about it. They always seem to blame Scientologists across the planet instead of the parents. But what can you do when the leader has your parents in servitude because they are fanatics? And they are the people dominating all of the rest? You can only try to rise above it all. And she did. Children are a trust from God. Whatever else these " Scientology Management" people who were lording over Scientologists, were trusted with, children were not and is one of them. The party line was, "there is no such thing as a "child" identity. Wholly invalidating them. Some did not survive. Others were traumatized as they were donated to Scientology as human trafficking victims by their parents. This is the poster child. Must read. Valuable information.

I'm only about half way through, and the pronunciation of etc as "egg said ruh" drives me absolutely bonkers, as another reviewer said.

Heart wrenching book - that really shows how awful L Ron Hubbard was. Creating fear from the top - he showed little empathy to his staff and fellow Scientologists. If something didn't go his way, people would pay.. new orders created. What this family went through tells the reader Scientology has been abusive from the beginning. I highly recommend.

In depth and timelined.

Very long winded and detailed story.A fascinating insight into the Early years of the sea org. Would have been better in an Aussie accent,and with words pronounced correctly!!

The book is fantastic. The person reading it does a good job. However, repeatedly hearing her pronounce "etcetera" as "egg said ruh", drove me absolutely bonkers.

I'm really surprised and disappointed that, after all the years this author spent with LRH, THIS is the best she can do when recounting her experience with Scientology. She rambles on and on about the most tedious "events" over the years that there's really no story to tell. Bouncing back and forth in the timeline sure doesn't help, either. I'm more than halfway through and I just can't go any further. There are so many other books out there that give the reader a much more interesting, in-depth insight into the authors' experience with Scientology (Jenna Miscavige, Leah Remini, Janet Reitman...). Don't waste your time or money on this one.

A lot of ship stories.

I think that this book could have had a lot more potential. Most of the book talks about when she was between 12 and 14, around '68 and '70. Most of the stories are about the beginning of Scientology fleet and their adventures. There are lots of details and descriptions from the eye of a mostly 12 year little girl. It's interesting to know all these details if you want to know this period in the history of Scientology. But unfortunately, considering that she was part for a longer time in the church/cult, there's nothing more on the rest of her life, or Scientology life after more or less 1970. Sometimes it's difficult to follow and it could be boring in some chapters. One of the main problem is that she goes back and forward between past and future. Often, you can understand it but sometimes you don't really understand why these back and forward as a more linear story would have been better, and even more enjoyable. However, I've found the most of it interesting. It could have been 4 hrs shorter.

I just woke up

If you suffer from insomnia just start listen start listening to this book and make sure you're not holding any shsrp objects or happen to be walking or any place where you could fall asleep and end up waking up hours later with your face hard pressed against your keyboard don't me! Make sure you have a seatbelt on So yah I hated this book.