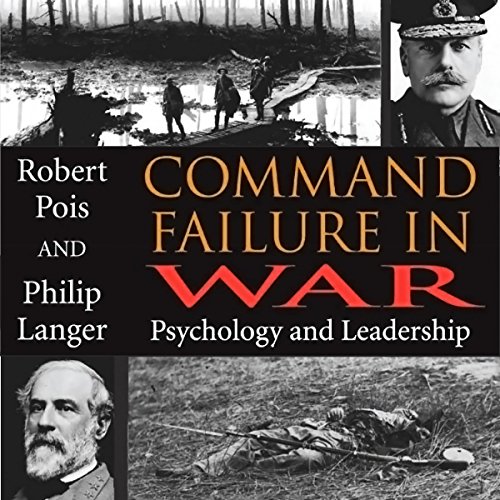 By: Philip Langer,Robert Pois
Narrated by: Tim Welch
Try for $0.00

Why do military commanders, most of them usually quite capable, fail at crucial moments of their careers? Robert Pois and Philip Langer, one a historian, the other an educational psychologist, study seven cases of military command failures, from Frederick the Great at Kunersdorf to Hitler’s invasion of Russia. While the authors recognize the value of psychological theorizing, they do not believe that one method can cover all the individuals, battles, or campaigns under examination. Instead, they judiciously take a number of psycho-historical approaches in hope of shedding light on the behaviors of commanders during war.

The other battles and commanders studied here are Napoleon in Russia, George B. McClellan’s Peninsular Campaign, Robert E. Lee and Pickett’s Charge at Gettysburg, John Bell Hood at the Battle of Franklin, Douglas Haig and the British command during World War I, "Bomber" Harris and the Strategic Bombing of Germany, and Stalingrad.

What listeners say about Command Failure in War: Psychology and Leadership

This book is not leisurely one, and definitely requires a certain level of mastery on the subject of history of war, and some degree of psychology knowledge to fully grasp. Thos text is a bridge betwixt military history and psychology.

The text is very likely to challenge your views on certain military figures and this will likely to you grow more apprehensive about what you are hearing. It was so for me. As I continued on with the book, my tension eased, and perhaps somewhat grudgingly, I began to appreciate the viewpoint presented. Book provides food for thought, and an opportunity to look at events in new, unfamiliar ways.

Bear with it, overall, authors are refreshingly modest in the self-perceived power of their analysis, as diligent scholars ought to be. I would go as far as to say as this may be a good candidate for a mandatory reading for candidates to officer’s school (assuming they had sufficient prerequisites to be able to grasp the substance).

All in all, not a book for everyone. But those who have the necessary foundation, will find the book refreshingly challenging, and a fuel for conversation among your peers.

On the technical side, book has some relatively minor issues with narration. At later parts, narrator repeats lines several times on a few occasions - this was a bit disorienting, at times.
Also, his pronunciation of foreign names (among the languages I have knowledge of)is, at times, comically atrocious.

This book gives us an insight into some psychological factors that lead to failures in military operations. We learn that psychology plays a role in historical analyses. This book is definitely easier to understand if you have a decent amount of knowledge of the history of war and psychology. As someone who doesn't have much interest in history, it was a bit hard to follow everything that was going on. There were only a couple of things I was completely able to grasp. Some people that the book covers are George McClellan, Frederick the Great, Napolean, and Hitler. It touches on their failures and why they happened. This book can be a bit hard to follow if you don't have much knowledge in these areas. I would recommend this book to anyone who is interested in history. One of my roommates, who loves history, heard me listening to this book from the other room and began talking about how interesting she thought this book was. She said she’d love to listen to the whole thing. Having historical knowledge will make this book more interesting and worth the listen. I think the narrator had a strong voice. The volume was great and I feel as if the author used proper emotion and energy to keep things interesting. This is not normally the type of book I would listen to, but I found myself interested in listening to it.

The text attempts to combine a psychological, social scientific approach, to the humanitarian study of history. It does this by analyzing individual military leaders across multiple time periods. From Frederick the Great, to Napoleon Bonaparte. American civil war general George McClellan and later leaders such as Stalin and Adolf Hitler. In concept, reading through these historical legends and discovering how their individual psychology effects their decisions would appear interesting. However, the authors failed to properly execute this idea and the book at times merely drones about historical facts of individuals with complex psychological concepts inserted periodically. It would appear that the psychologist, is a Gestaltist who attempts to combine historical evidence to support the Gestaltist assertion that the sum whole of an organization or event takes precedence over every little detail at play. While the historian provides the listener with every little detail at play for the psychologist to sum it all up at an organizational level, using ideas such as psychological field theory in combination with the leaders. Perhaps I am wrong, and interpreted their work incorrectly, I may have and part of that is due to how it was written. Overall the book lacks structure, consistency and though I appreciate the content and ideas discussed, the academic authors should take Journalism courses and modify their writing styles in order to make such a wonderful idea more enjoyable to listen or read. The narrator of the book has a smooth voice and attempts to spice up banal paragraphs with passionate flair, but fails, through no fault of his own, but through the fault of the writers. In short, I recommend this book if you are someone well versed in psychology and warfare. If you are not, I would read at your own risk or challenge. It is not introductory, it is a little more advanced, and is certainly helpful if you are someone who has academic experience in either field but is not the most riveting book for someone trying to listen to (what could be)an interesting combination of history and psychology.

I would recommend this for anyone that wants to get educated on the topics of military commanders and why they failed based on their personalities and methods of how they ruled. Every chapter talks about cases of military commanders and the authors realize the value of psychology and how personalities and other reasons causes these leaders to fail at the crucial point of their career. Examples of some leaders are people like Napoleon and Hitler and how their aggression and over confidence caused their downfall. I also thought the narrator made it so much more interesting to listen to because of his enthusiasm, he wasn’t monotoned at all. Definitely would recommend for informational purposes.