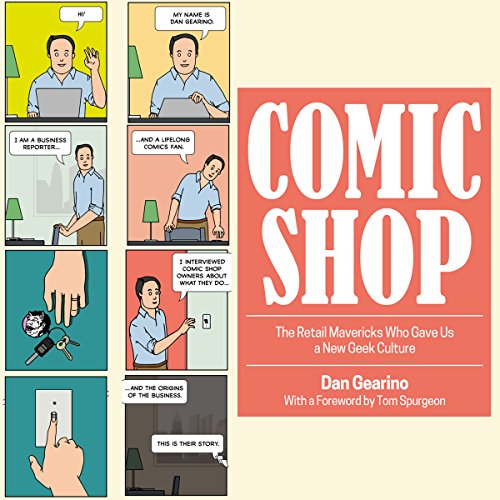 The early 1970s saw the birth of the modern comic book shop. Its rise was due in large part to a dynamic entrepreneur, Phil Seuling. His direct market model allowed shops to get comics straight from the publishers, bypassing middlemen. Stores could better customize their offerings and independent publishers could now access national distribution. In this way, shops opened up a space for quirky ideas to gain an audience and helped transform small-press series, from Teenage Mutant Ninja Turtles to Bone, into media giants.

Comic Shop is the first book to trace the history of these cultural icons. Dan Gearino brings us from their origins to the present day, when the rise of digital platforms has the industry at a crossroads even as sales are robust. He spends a year with stores around the country, with a spotlight on The Laughing Ogre in Columbus, Ohio. Along the way he interviews those who shaped comics retailing from the early days, including many pioneering women; top creators; and shop owners who continue to push the industry in new directions. A guide to 40 of the most interesting shops around the United States and Canada is a bonus for fans.

“This is essential reading for anyone who wants to understand comics in the US...a fascinating page turner.” (Heidi MacDonald, editor, The Beat)

What listeners say about Comic Shop

An interesting history combined with an overview of what a comic shop was and is.

A great "behind the scenes" of comics retail

A great book -- well researched and told -- by a great journalist. Even as a long-time comics fan I had only the briefest understanding of the history of these specialty shops, so Gearino's book was a real eye opener and well as being a page turner (so to speak). I like that he spends as much time on the industry today as he does on it's history, including a long section at the back with store recommendations (which probably works better in print, but it has enough anecdotes to keep you listening).

A word about the narrator : I like his conversational tone, and his general reading style is easy to follow, but he should have done more research into pronunciation on people's names. I know there's a few he gets wrong, and that makes me suspect there are more. Also there are a number of places (usually interview quotes) where it's clear he doesn't know the subject matter so he gets the emphasis wrong or pauses in the wrong place. Minor quibbles for most, but it grated on me. Worse, during the second part of the book (starting with chapter 15 (17) where he lists comic shops), there are a lot of places where the first part of a word at the beginning of a section is cut off, presumably by the technician who was cutting together all the good takes, and that gets to be pretty annoying too. Though this is certainly not the narrator's fault, he comes off the worse for it.

A History of the All-American Comic Shop

A unique book on an obscure topic. Virtually no serious academic attention had been focused on the Comic book store; until now.

If you have even a smidgen of love for the ubiquitous comic book shop - you will find this book interesting, to say the least.

The narration was definitely good, just not great. I realize this is subjective. Most will enjoy his professional reading of the book; I know I did (overall).

This book will lead to more serious study of the topic and for that we should all be grateful to the very smart author who created it.

A lot of info

good listen lots and I mean lots of info. I now want to visit all of the shops he descibes.

A one of a kind insight into a unique business. As a business owner, I was very interested in hearing the solutions and ideas for success, and amazed at how different they were from each other.