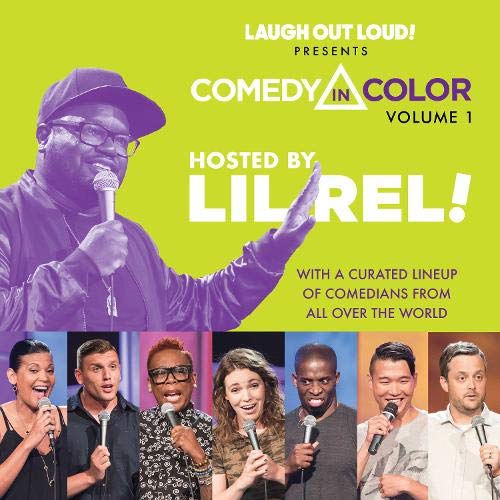 A brand-new audio series collecting live recordings of the most hilarious stand-up comedy routines from Laugh Out Loud’s hit Comedy in Color franchise, which debuted on Pluto TV.

Comedy in Color, Volume 1 welcomes listeners to the largest international comedy festival on earth with curated stand-up sets from 10 jam-packed shows at the world-famous Just for Laughs Comedy Festival in Montreal. Lil Rel Howery (best known for his breakout role in Jordan Peele’s Oscar-winning film Get Out and the Fox series Rel) will serve as host, providing original material and personal stories from his experiences at JFL, as well as introducing our lineup of 40 of the funniest comedians from Comedy in Color, including Chris Distefano, Aida Rodriguez, Vir Das, Godfrey, Ronny Chieng, and Nate Bargatze. Lil Rel’s set is also featured in Volume 1. Laugh Out Loud debuted the Comedy in Color stand-up franchise on Pluto TV earlier this year and has already seen immense success, bolstering Laugh Out Loud as one of the top comedy channels on Pluto TV.

What listeners say about Comedy in Color, Volume 1