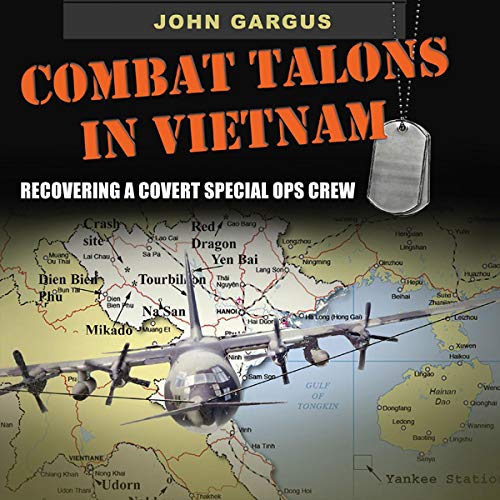 Combat Talons in Vietnam is a personal account of the first use of C-130s in the Vietnam War. It provides an insider’s view of crew training and classified missions for this technologically advanced aircraft. One night, John Gargus, a mission planner, oversaw an operation in which the aircraft - carrying 11 crew members - failed to return from a nighttime mission. For 30 years, a search for the missing aircraft remained in progress.

When wartime mission records were declassified, Gargus embarked on a long journey of inquiry, research, and puzzle-solving to reconstruct the events of that mission and the fate of its crew. He discovered that the wreckage of the plane had been found in 1992 and that the remains of the crew were being held in Hawaii. Through numerous Freedom of Information Act requests, interviews, and site visits, Gargus sought to answer the question of why it took so long to find the wreckage and, more importantly, why the special operations command units were left uninformed. By 2000, the remains were relocated to a common grave at Arlington National Cemetery, at last providing a measure of closure to family, friends, and comrades.

"The story is revealed in a gripping narrative that shows the everyday details of life in the unit along with the much bigger story of the lost aircraft." (Military Heritage)

"A renowned MC-130 navigator and SOG veteran, no one could have better told the story of SOG's top secret 'Blackbirds' than Col. Gargus. Well done, with much detail." (Maj. John L. Plaster, US Army Special Forces and SOG veteran)

"The narrative enlightens and inspires, and reminds us of those who served, and those who perished, pursuing excellence in special operations aviation." (Norton A. Schwartz, general (ret), USAF19th chief of staff)

Overall I thought this story was very eye-opening. Gargus went through a long search just to find closure and answers to questions he had for years. This process was explained in great detail and allowed the listener to gain a sense of understanding of how intense the journey was. Gargus's determination allowed him to make discoveries; While at the same time helping provide closure to the many families who were left in the dark about their loved ones for years. Overall I thought the story was both interesting and informative.