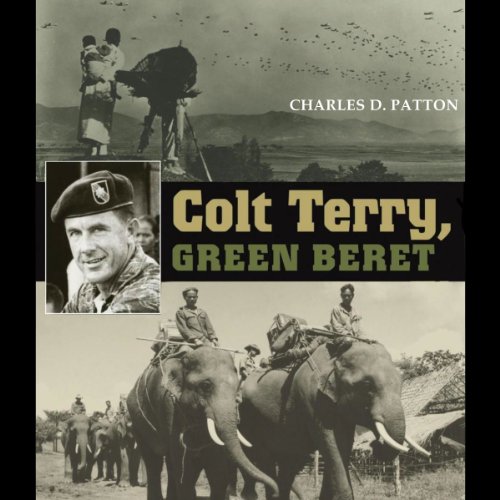 By: Charles D. Patton
Narrated by: John Skinner
Try for $0.00

Through one man’s career, Colt Terry, Green Beret portrays the birth and development of America’s most elite fighting unit. The 10th Special Forces Group was the first of the Green Beret units. Its five hundred men, all Airborne and mostly Rangers, received extensive training in everything from specialized weapons to uncommon languages. Their primary mission was to train and lead indigenous guerrillas operating in enemy territory. Second Lieutenant Colt Terry, who had joined the 82nd Airborne in 1947, had already done this in Korea. As a volunteer in the 10th SFG, he carried on his service, working with the Montagnards in Vietnam and The Khmer in Cambodia. He fought at Pleiku, Duc Co, and Plei Me, and he ferried supplies and weapons on elephants into Cambodia.

From his enlistment as a buck private in 1945 to his retirement as a lieutenant colonel in 1970, Terry served five tours in combat, trained guerrillas, and earned two combat infantry badges, a Purple Heart, and two Bronze Stars. His experiences contributed to Special Forces’ expertise in ambushes and killing techniques. Even as an officer, Terry never shied away from going deep into the jungle in search of the Viet Cong and North Vietnamese Army. He personally organized a successful effort to save hundreds of men in one of Special Forces’ most critical A-team camps.

As one of the original Green Berets, Terry helped set the standards by which these units have become known. Anyone who has ever wondered what the Green Berets were like during their first two decades will appreciate the riveting action and close-up detail of Terry’s true-life story.

This is the story of Curtis "Colt" Terry, one of the original Green Berets. The information for this story came primarily from Colt's personal recollections documented in taped interviews. Many facts were confirmed with fellow paratroopers, military historians, and Special Forces NCOs and officers who served with him.

Colt gave the interviews to leave a record of his experiences. After hearing Colt’s story, the author felt that other people should know this man.

"A valuable contribution to military history. While U.S. special operations forces have long been a niche subject in military history, recent U.S. operations in Afghanistan and Iraq have demonstrated their increasing importance in modern warfare and raised interest in general over the origins and development of unconventional units... [This book] provides and important and rarely seen perspective that complements a growing body of historical work." (James Jay Carafano, Douglas and Sarah Allison Center for Foreign Policy Studies)

Fascinating book. If you enjoy military history with first hand combat details this will book will be worth your time.