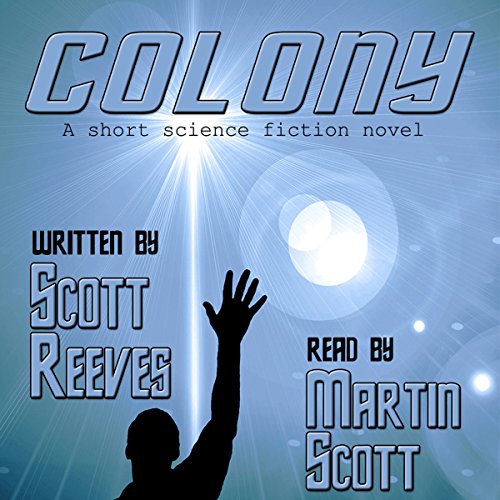 By: Scott Reeves
Narrated by: Martin Scott
Try for $0.00

In the 13th century, Earth is dangerously overcrowded. To reduce the population, people are chosen by lottery and shipped off to the stars to colonize other solar systems. Shiploads of colonists are dropped off on unexplored worlds and left to their own devices.

Jorge Leever and Meesha Androva are the only survivors of one such failed attempt to colonize a distant planet. For 20 years, they've been alone, unable to communicate with Earth. Now, another cargo ship arrives and discharges a new group of would-be colonists. Jorge and Meesha intend to guide the development of the new colony, since they've accumulated 20 years' worth of knowledge about the planet. Bannock, a brutal, criminal slumlord back on Earth, has other plans. He intends to reestablish his crime syndicate on this fledgling colony world and eventually return to Earth as a conqueror. But Jorge and Meesha stand in his way.
©2001 Scott Reeves (P)2012 Scott Reeves

What listeners say about Colony

Has a nice story line for a short 4 hour book. It also has good narration.

This is the year a ship arrives. Although Jorge and Meesha are thrilled to have other people the group includes some brutal criminals. The leader of the criminals, Bannock, plans to take over the colony and spread his control to other planets as well as returning to Earth. He brought along a tool in the form of a female, Aria, who has special powers.

Aria and a handful of others make friends with Jorge and Meesha. They want to work together but they need to protect each other and their secrets too. Jorge and Meesha know that Bannock needs them because they know the dangers that exist on the planet and obviously know how to survive. On the other hand, they pose a danger to Bannock’s control.

As Bannock threatens lives, Aria makes a connection that may be the only hope for the colony to survive as a healthy, good society instead of an evil, criminal syndicate. Aria ultimately takes a risk for the sake of all.

The battle between good and evil is nothing new but this story is a good adventure with interesting elements. I liked Jorge, Meesha and Aria’s brave characters and I liked the friends they make. The writing was not stunning but it is comfortable story telling and I enjoyed the creative aspects of the alien land and dangerous creatures. The action kept me wrapped in the story waiting to discover what happened next.

Audio Notes: The narration was done well, blending the characters and pacing to keep the forward motion of the story. This is short and easy to listen to. I would be glad to read more by Mr. Reeves and listen to other readings by Mr. Scott.