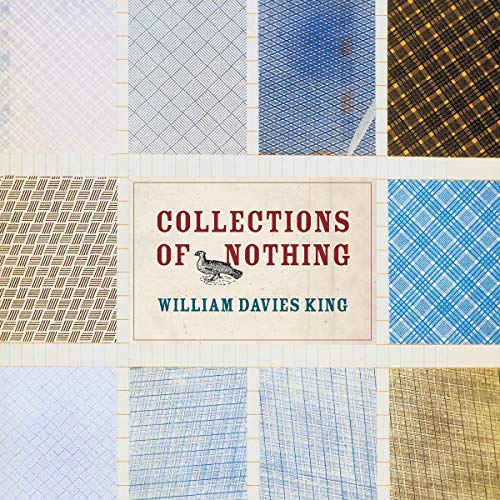 By: William Davies King
Narrated by: Robert Pavlovich
Try for $0.00

Nearly everyone collects something, even those who don’t think of themselves as collectors. William Davies King, on the other hand, has devoted decades to collecting nothing - and a lot of it. With Collections of Nothing, he takes a hard look at this habitual hoarding to see what truths it can reveal about the impulse to accumulate.

Part memoir, part reflection on the mania of acquisition, Collections of Nothing begins with the stamp collection that King was given as a boy. In the following years, rather than rarity or pedigree, he found himself searching out the lowly and the lost, the cast-off and the undesired: objects that, merely by gathering and retaining them, he could imbue with meaning, even value. As he relates the story of his burgeoning collections, King also offers a fascinating meditation on the human urge to collect. This wry, funny, even touching appreciation and dissection of the collector’s art as seen through the life of a most unusual specimen will appeal to anyone who has ever felt the unappeasable power of that acquisitive fever.

"What makes this book, bred of a midlife crisis, extraordinary is the way King weaves his autobiography into the account of his collection, deftly demonstrating that the two stories are essentially one.... His hard-won self-awareness gives his disclosures an intensity that will likely resonate with all readers, even those whose collections of nothing contain nothing at all." (New Yorker)

"King's extraordinary book is a memoir served up on the backs of all things he collects.... His story starts out sounding odd and singular - who is this guy? - but by the end, you recognize yourself in a lot of what he does." (Julia Keller, Chicago Tribune)

What listeners say about Collections of Nothing