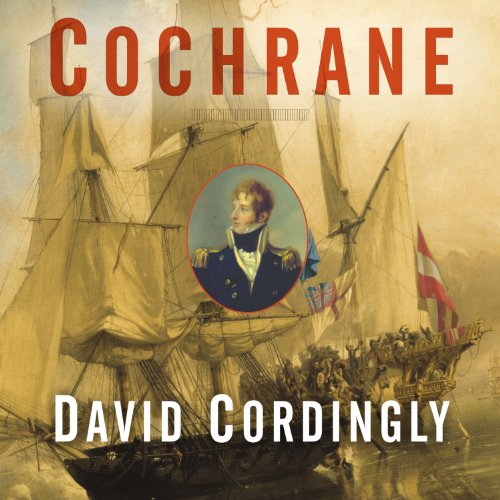 By: David Cordingly
Narrated by: John Lee
Try for $0.00

From the best-selling author of Under the Black Flag comes the definitive biography of the swashbuckling 19th-century maritime hero upon whom Jack Aubrey and Horatio Hornblower are based.

Nicknamed le loup des mers ("the sea wolf") by Napoleon, Thomas Cochrane was one of the most daring and successful naval heroes of all time. In this fascinating account of Cochrane's life, historian David Cordingly unearths startling new details about the real-life "Master and Commander", from his daring exploits against the French navy to his role in the liberation of Chile, Peru, and Brazil, and the shock exchange scandal that forced him out of England and almost ended his naval career. Drawing on previously unpublished papers, his own travels, wide reading, and the kind of original research that distinguished The Billy Ruffian, Cordingly tells the rip-roaring story of the archetypal romantic hero who conquered the seas and, in the process, defined his era.

What listeners say about Cochrane

First of all, I was amazed that there was so much information available on Cochrane to put into a book. I suppose, given his exploits and his fame, there would have been plenty of accounts written up about him. As for his personal life, not so much. But in this case, it is the details of his career that are of the most interest. Cordingly does a terrific job of stringing together all his sources to produce a coherent narrative of Cochrane's career. As great a job as Cochrane did, ultimately it seems that his superiors were content to use him as a line officer. Proof once again that who you know matters more than what you do. Or maybe it's about personality. Either way, lessons abound in this book for all of us trying to find our way through our own careers. Of course, for those fans of C.S. Forrester or Patrick O'Brien, it's a great treat to read about the original character on whom they built their respective series of books.

There is a better book on Lord Cochrane

No. The author seems to grant Lord Cochrane only limited and grudging approbation. The author expresses a "balanced" view of this giant of a man - a bit like a shopkeeper's considered opinion of a great hero. This "damning by faint praise" seems mildly distasteful to me. The subject of the book is utterly fascinating and his accomplishments beyond the reach of but a few score of individuals in human history. I liked "Cochrane: The Life and Exploits of a Fighting Captain" by Robert Harvey much better. It is also available on Audible.

Has Cochrane turned you off from other books in this genre?

Not at all - but I've been turned off from other books by Mr. Cordingly.

A movie about Lord Cochrane could be great fun - but not one based on this book.

This book is essentially a tedious laundry list of Lord Cochrane amazing achievements. The subject is fascinating but the author does not seem to be captivated. I liked "Cochrane: The Life and Exploits of a Fighting Captain" by Robert Harvey much better. It is also available on Audible.

Anyone who likes the Master and Commander books and the Hornblower books will love the real life adventures of this English/Scottish sailor who lived the stories of Aubrey and Hornblower.

I love the way the narrator switched between accents (Spanish, Scottish, French) when changing POV. Very well done and a wonderful book!

Having been through the OBrian Cannon more than once and having followed Capt Aubry in many of the same adventures and missadventures as Capt Cochran it is hard not to compare what was borrowed and what went on. It is patently unfair, but the real Cochran suffers by comparison.

Great story of a naval officer who understand and implemented naval warfare tactics, often against overwhelming idds, to achieve victory. Also a man who exposed and fought against inequities within Royal Navy who in doing so was viewed with animosity by those guilty directly or indirectly. Lived as a gentleman but often his ego was his worst enemy. We don't have his type of officer these days - they focus all too often on staying out of trouble. Bravo to Lord Cochrane!