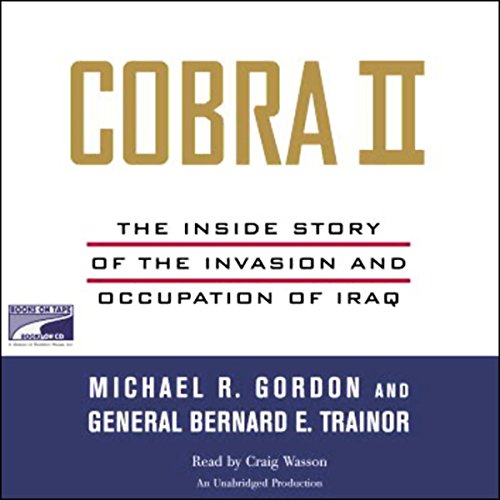 Informed by unparalleled access to still-secret documents, interviews with top field commanders, and a review of the military's own internal after-action reports, Cobra II is the definitive chronicle of America's invasion and occupation of Iraq, a conflict that could not be lost but one that the United States failed to win decisively. From the Pentagon to the White House to the American command centers in the field, the book reveals the inside story of how the war was actually planned and fought. Drawing on classified United States government intelligence, it also provides a unique account of how Saddam Hussein and his high command developed and prosecuted their war strategy.

Written by Michael R. Gordon, the chief military correspondent for The New York Times who spent the war with the Allied land command, and Bernard E. Trainor, a retired Marine Corps lieutenant general and former director of the National Security Program at Harvard University's John F. Kennedy School of Government, Cobra II traces the interactions among the generals, Defense Secretary Donald Rumsfeld, and President George W. Bush. It dramatically reconstructs the principal battles from interviews with those who fought them, providing reliable accounts of the clashes waged by conventional and Special Operations forces. It documents with precision the failures of American intelligence and the mistakes in administering postwar Iraq.

Unimpeachably sourced, Cobra II describes how the American rush to Baghdad provided the opportunity for the virulent insurgency that followed. The brutal aftermath in Iraq was not inevitable and was a surprise to the generals on both sides; Cobra II provides the first authoritative account as to why. It is a book of enduring importance and incisive analysis, a comprehensive account of the most reported yet least understood war in American history.

"A superb account and analysis of what went right and what went wrong in the Gulf War. All of the inside stories of the people and the policies, the triumphs and the blunders, are here." (Jim Lehrer)

What listeners say about Cobra II

Cobra II is a comprehensive and elaborately detailed account of the planning, execution and aftermath of the 2003 invasion of Iraq. Describing in detail meetings, teleconferences and phone calls between CENTCOM, The Pentagon and the White House, this book tells the story of how Donald Rumsfeld’s vision of a new type of warfare leads the war into the quagmire it is in today. The book is written from a military historians perspective and is replete with stories of soldiers bravado and courage. It is filled with interesting sources such as details about initial war planning meetings that were held in a trailer in the CENTCOM parking lot. The book explains the Bush Administration’s false expectations that there would be no need to engage in complex nation building and an extended conflict. After the invasion the Iraqi police, military and bureaucracy would remain intact. These false assumptions, based on bad intelligence, are the reason for the current situation in Iraq, according to the book. The narrator is clear and not dull but often adds a macho emphasis especially when describing weapons and attacks. This audio book is well worth the price.

The book itself is great. However, when trying to find specific chapters in the book, they don’t line up with the audible chapter titles. It took me 30 min to find chapter 16 start point and that’s only because I listened to various parts until heard the narrator transition from chapter to chapter.

Chapters are not aligned

Great book, great narration.... but, if you want to just listen to a specific chapter, you'll find yourself disappointed as the individual chapters don't start at the beginning of the actual chapter and it's pretty much impossible to know where the chapters start in time without listening to the whole thing or at least a good 30 to 45 minutes after selecting an individual chapter. I would like to see this rectified by audible.

This audio book is the finest in the area of Iraq.I study history and that's what this book is.This book is based on fact and is The best i have seen.If your interested in Iraq, this is the book you want.Best money I have spent on a book Period!!!!!

super detail and clinical assessment of the political and military at operational and strategic levels. read this now!

A Must-Read for Every OIF Veteran

Awesome, incredible amount of insight from the White House down to war fighters in the field.

While there are many tactical-level accounts of Operation Iraqi Freedom (OIF), this book has provided the most comprehensive look at the strategic and operational-level decision making involved in planning for and executing the first few months of the war. My overall impression: 1) I can’t believe just how wrong our leadership was in our view of Saddam, the Iraqi military and government, and the limits of our capabilities; and 2) I better understand the perspectives of those that fought in the Vietnam war: they have a holistic understanding of the interplay between the state, military, and people, and had experienced first-hand the failure to those that took this for granted. I’m not surprised to learn from this book that Colin Powell was the one leader closest to forecasting the difficulties we would experience.

By the way...the narration was very good. A little dramatic at times, but he didn’t put me to sleep.

This book creates an interesting dynamic for a war history. Providing a detailed account of the US and Bush administration and the parallel story of the Iraqi governments decisions before and at the start of the war. It goes through how both sides really sacked it on decision making and missed clear indicators. It then gives a boots on the ground recounting of the war with ties back to the effects from decisions made by leadership. The book ends by looking at how the US leaders were miss guided, miss informed, and ignorant on how to rebuild Iraq which is honestly more tragic than anything else. It's hard when there was potential and it ends with Iraqis viewing the US soldiers as occupiers rather than liberators. This is great history and I look forward to the next book where I can hear how a second administration sacks it and leaves the Iraqi people out to dry.

One of the most well researched, candid, and honest looks at this war, how it began, and how it was executed... Hardline pundits of both the left and right are sure to be angered by disclosures found this book. Unapologetically honest, it should be required reading for anyone seeking to engage in public discourse on international or military affairs.