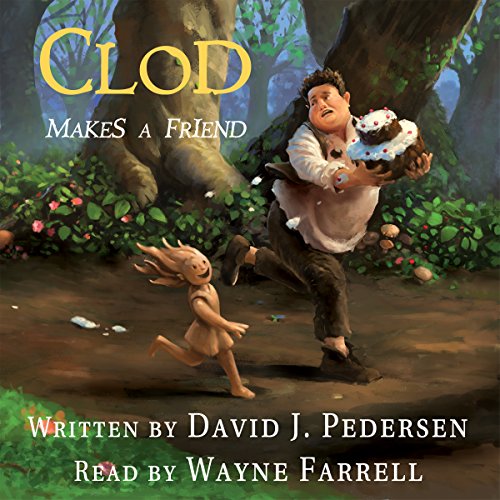 By: David J. Pedersen
Narrated by: Wayne Farrell
Try for $0.00

Best friend ever? Bullies love to hate Clod. Not just because he’s bigger, clumsier, and uglier than his classmates - he’s also the only student in his school without magic.

In a world where all magic is possible and everyone else is born with great gifts to do amazing things, Clod is alone. Living with his mum in a broken-down cottage on barely enough, the only thing Clod has to play with is the clay she occasionally brings him. To call his life bleak would be an understatement.

More than anything, Clod wants a friend. The only way that’s going to happen, is to make one himself. After an angry visit from the worst of the bullies, Clod’s clay sculpture of a little girl comes to life and introduces herself as Ada.

For a clay girl barely the size of his hand, she has more confidence and courage than he knows what to do with. Every adventure she leads him on gets Clod into trouble. She may be the friend he wants, but is she the friend he needs?

After many years, and too many pranks, Yugen, his teacher, becomes convinced that Clod is tainted by the evil slowly infiltrating the Kingdom of Pag. Especially when Ada isn’t the only one Clod can bring to life. Clod Makes a Friend is a bittersweet fairy tale for all ages from David J. Pedersen, author of the Angst series of fantasy novels.

What listeners say about Clod Makes a Friend

This book looked like something that perfect for my younger son, who really enjoys the fantasy Harry Potter style books.
First, the story-telling is very rich and immersive, we found ourselves in his world, with wonderful descriptions and heart-string pulling events.

We really got into the story, and the characters. So many of the themes in the book resonate so well with everyone. Bullying, not fitting in, feelings of self doubt, being sad and alone.

I was absolutely amazed at the beautiful descriptions and storytelling which had me imagining every twist and turn of the book. This has some deeply emotional parts that might even choke up a parent, so... no shame.. Just saying.

The voice actor may be one of my new favorites on Audible - what a fantastic job with the different characters, and even as Clod ages. Loved it!

I would absolutely recommend this fantastic novel by David Pedersen, and all of his other books as well, such as the Angst series. Pick this up today!

What was one of the most memorable moments of Clod Makes a Friend?

Which character – as performed by Wayne Farrell – was your favorite?

Clod and the shaman

The title is perfect! Clod Makes a Friend

I loved this story so much. It was wonderful to see Clod grow as a person.The messages about inner beauty and loving yourself really hit home.

The Story is Fantasy, But the Emotions are Real

This is an engaging tale brimming with life lessons, while still being fun and fanciful. Set in a vivid fantasy world full of diverse forms of magic, Clod Makes a Friend tackles the serious subject of being a childhood misfit and social outcast, hitting each note prefectly. There is a depth of feeling in this tale that is both bittersweet and meaningful. I highly recommend this book to those who need a good cry or who might wish to impart valuble life lessons to their children. Pederson hit a homerun with this one and Wayne Ferrell delivers a moving performance. Well done!

Clod is a Tale for All Ages

I have read Mr. Pedersen’s tales of Angst. I adore the series. Clod Makes a Friend is a different arena and I went into listening to Clod with an open and excited mind. Everyone loves a good story, and to have the story told in a fashion that makes you jump hither and fro in your heart at the narrator pulls you this way and that is even more special. Mr. Wayne Farrell was superb in his portrayal of Clod, Ada along with the other characters. Believable from the start, consistent throughout and full of emotion, warmth and understanding to the end.

Clod is easily identified by anyone that has grown up. Who hasn’t had heartache, joy, bully(ies) and hopefully a fierce friend in their young life. I was able to identify so clearly with the characters Mr. Pedersen has written that I was near to tears in the first chapter. I am not usually weepy but the clearness, emotions and empathy that Clod and the other characters were created and placed with such care on the page is evident. In Mr. Pedersen’s works, I have no doubt he falls in love, befriends and would fight to the death for his characters. Mr. Pedersen has out done his previous works with Clod, Ada and the others in this tale.

Often in a review, I drone on about the story and this and that…. Not here, not with this tale. For this is a tale. One to be told around a campfire, over a series of evening at bedtime for wee ones or as two people sit in a park enjoying the day. I implore you to listen to this tale as woven by Mr. Pedersen, sung epically by Mr. Farrell, as you will have your heart touched, your mind entertained and will make a new best friend in Ada. There are ups, downs a few sideways but in the end. You will be all the better for hearing the tale of Clod Makes a Friend.