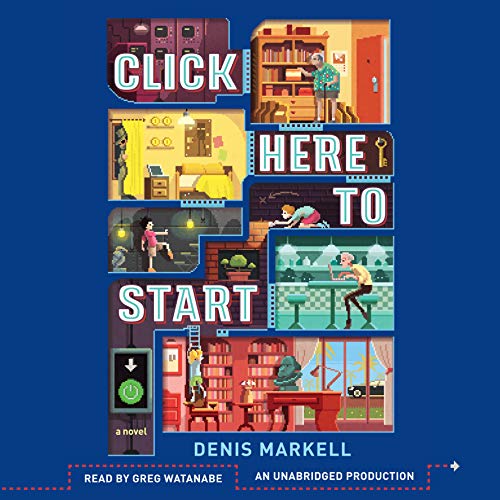 By: Denis Markell
Narrated by: Greg Watanabe
Try for $0.00

Young fans of Ernie Cline's Ready Player One will love this classic video game inspired mystery filled with elements of Escape from Mr. Lemoncello's Library and From the Mixed Up Files of Mrs. Basil E. Frankweiler.

What if playing video games was prepping you to solve an incredible real-world puzzle and locate a priceless treasure?

Twelve-year-old Ted Gerson has spent most of his summer playing video games. So when his great-uncle dies and bequeaths him all the so-called treasure in his overstuffed junk shop of an apartment, Ted explores it like it's another level to beat. And to his shock, he finds that eccentric Great-Uncle Ted actually has set the place up like a real-life escape-the-room game!

Using his specially honed skills, Ted sets off to win the greatest game he's ever played, with help from his friends, Caleb and Isabel. Together they discover that Uncle Ted's "treasure" might be exactly that - real gold and jewels found by a Japanese American unit that served in World War II. With each puzzle Ted and his friends solve, they get closer to unraveling the mystery - but someone dangerous is hot on their heels, and he's not about to let them get away with the fortune.

"As addictive as your favorite video game. I couldn't put it down." (Adam Gidwitz, New York Times best-selling author of A Tale Dark and Grimm)

An Amazon Best Books of the Month Selection

loved it - listened with my boys (9 and 11) who thoroughly enjoyed the plot and the modern references.

I really like the book!! super entertaining and full of adventure!!! I read the actual book with audible and got a great experience!!!

I really liked the storyline, I could imagine myself as a teenager chasing down the hidden treasure. Great listen for anyone.

A good story! Good for people who enjoy young adult sci fi. Not sure if the narrator matches the story