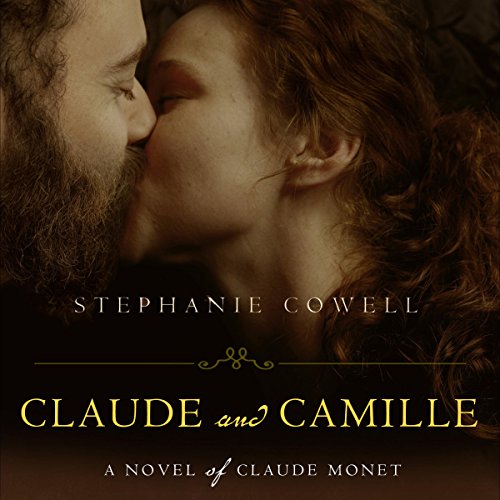 By: Stephanie Cowell
Narrated by: Christopher Cazenove
Try for $0.00

In the mid-19th century, a young man named Claude Monet decided that he would rather endure a difficult life painting landscapes than take over his father's nautical-supplies business in a French seaside town. Against his father's will, and with nothing but a dream and an insatiable urge to create a new style of art that repudiated the classical realism of the time, he set off for Paris.

But once there he is confronted with obstacles: an art world that refused to validate his style, extreme poverty, and a war that led him away from his home and friends. But there were bright spots as well: his deep, enduring friendships with men named Renoir, Czanne, Pissarro, Manet - a group that together would come to be known as the Impressionists, and that supported each other through the difficult years. But even more illuminating was his lifelong love, Camille Doncieux, a beautiful, upper-class Parisian girl who threw away her privileged life to be by the side of the defiant painter and embrace the lively Bohemian life of their time.

His muse, his best friend, his passionate lover, and the mother to his two children, Camille stayed with Monet - and believed in his work - even as they lived in wretched rooms, were sometimes kicked out of those, and often suffered the indignities of destitution. She comforted him during his frequent emotional torments, even when he would leave her for long periods to go off on his own to paint in the countryside.

But Camille had her own demons - secrets that Monet could never penetrate, including one that, when eventually revealed, would pain him so deeply that he would never fully recover from its impact. For though Camille never once stopped loving the painter with her entire being, she was not immune to the loneliness that often came with being his partner.

A vividly-rendered portrait of both the rise of Impressionism and of the artist at the center of the movement, Claude and Camille is above all a love story of the highest romantic order.

"A convincing narrative about how masterpieces are created and a detailed portrait of a complex couple, Cowell's novel suggests that a fabulous, if flawed, love is the source of both the beauty and sadness of Monet's art." ( Publishers Weekly)

What listeners say about Claude & Camille

The struggles of life and art are so clearly depicted in this novel. It is so easy to look at the finished world and assume that genius come forth with some ease. We marvel at art, architecture, design, literature.... Along with science, technology etc. and feel satiated by these bodies of work. This novel shared the financial struggle....the difficulties with which we can all empathize.... But clearly reminds us that there is an innate and undeniable passion that drives the true artist. For those of us that are artists.... We feel the obstacles of life getting in the way of our art..... And yet....We stand humbled by the reminder of this.....

A remarkable story that captures the couple's codependency while not taking away from the strength of their characters. It is easy for the reader to fall in love with Camille just as Claude has done. The author has created a significant achievement and the reader only enhances the quality of work. I thoroughly enjoyed this listen.

If you could sum up Claude & Camille in three words, what would they be?

What was one of the most memorable moments of Claude & Camille?

Claude's ability to get over his feelings of betrayal by Camille.

Have you listened to any of Christopher Cazenove’s other performances before? How does this one compare?

No, I have not listened to other performances, but I certainly will in the future.

No, Its too long to listen to in one sitting.

This was a very worthwhile story.

Fun read. Very personal account of his relationships with family and especially his first wife. Reads easily. Excellent for those who like the personal focus. Does touch on his painting, painting difficulties, and painting friends. If you are looking to familiarize yourself with the relationship with friends and family, the place and the painter this is the book for you. If you want a more scholarly study of Monet's struggles and work, look elsewhere.

Well done love the explanation done at the end by the author even giving details of Claude Monet's burial site and grounds - listened intently of how all the characters were described to their appearance and dress even facial expressions made you feel you were actually there - Stephanie Cowell was awesome thank you for bringing this to listeners and readers alike ! - Cindy

My background is art history and personally am obsessed with impressionist era of art history, but never read or heard anything so beautiful on these 3 musketeers! The love story and Claude Monet’s love on “ woman in green dress” was described with passion and the reader on audible made it more intense! I read this once, but listened to it 3 times . ;) thank you .

The reader gave this novel life as did the wonderous spinning of the story! I am ever so grateful for the read!

Too much of a soap opera

I'm sure the sordid details what could have happened didn't need to be included to carry the story.

This book takes Liberty with the story of Monet but is overall a really nice read. Worth listening to, great performance by the narrator