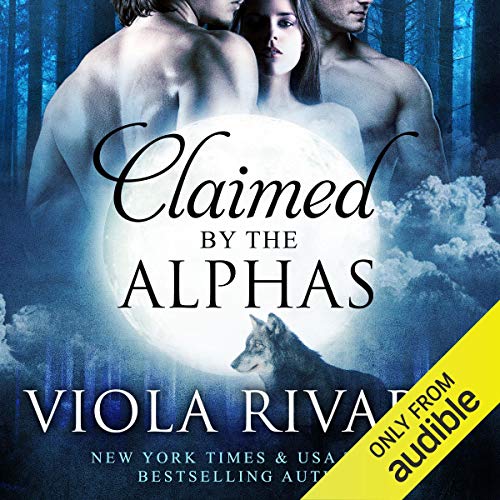 Claimed by the Alphas: Complete Edition

Claimed by the Alphas: Complete Edition

A curvy young woman sets out into the wilderness to become the mate of an alpha werewolf. Trouble is, her new pack has two alphas. Both males are very different, but they have one thing in common: they're each determined to sire her children!

What listeners say about Claimed by the Alphas: Complete Edition

I got this book based on a glowing review of someone I usually agree with, sadly this time we disagree. While it wasn't a bad book nothing really happened. It can be summed up by saying one girl, two alphas that agree to share the one girl for the good of the pack...but even the hot scenes weren't too hot...and the girls job is to make babies and not complain that she has to live in a cave.

The narrator was male, therefor all the females sounded like males, and the one male sounded like a robot, which may or may not have been character based...either way it didn't work for me.

I would pass on this book, maybe get it when it is $4.95 some time, but not worth a buy or a credit.

What made the experience of listening to Claimed by the Alphas: Complete Edition the most enjoyable?

I loved the entire book from beginning to end, i loved way he changed his voice inflection with each characters voice verse written parts was easy to listen to and very pleasurable i will listen to again later down line.

There alot of scene i like but when Dawn eat the butterfly well, ya love that. I love the ah love scenes wont go into detail there nope. I also love fact she brought hair dryer and other electronics to the den.

I love this author period she has other written works that worthy of reading, and i will be glad to listen to anything she has produced in future, i will also look for other book the mans has voiced over.

Lots of Sex, then more sex, Is that bad?

Here goes I did finish this listen and some parts were very, very HOT, literally not steamy, freakin' panty dropping hot. This could be erotica for the 50 shades type girl or even BDB (which I am both). Began with good plot then went into choosing, then not choosing, then angst between the Alphas, and well....... lots of pack dynamics. For me too many for one listen would like more in between sex scenes.

This is the first book that I have listened to that was written by Viola - can't wait to get to the next one. I really enjoyed this book. Lots of steamy scenes and good plot.

WELL IT HAPPILY MADE MY TONGUE LOLL & MY TAIL WAG!

Mila always had a fascination with Werewolves so, when she saw a chance to go live with them, she grabbed it with both hands - "be the town's sacrificial mate to the Alpha? Hell yeah.... sign me up" she thought. However, when she gets there she finds out there are not one but two hot n handsome Alphas, they are best friends and having two Alphas makes the Lazarus Pack powerful. They are both dominant Alphas but Caim is the strong Warrior type, he doesn't want a mate, he's sharp tongued and is imperious however, Asch is more of a calm thoughtful Leader and he's desperate for a mate that can give him pups. So it's an easy decision right?.... nope the Alphas have to fight to the death until only one of them can claim and imprint with Mila but the death of one of them will weaken the Pack leaving them vulnerable to Wars with other Packs. However, the lucky sneaky clever girl has another 'sacrificial' plan..... but don't feel sorry for her.... nope not even a little bit.

As this story unfolds there are a host of interesting, likeable and not so likeable characters, with funny, amusing, sweet, snappy, rough, bitchy and annoying dialogue and three main characters who are drawn into a dangerous ménage that could still end in death. Arrogant Caim is the only one who needed 'character adjustment' and thankfully he got it after he sampled The Human's body..... and wanted more. Mila went through a kaleidoscope of emotions.... doubt, anxiety, exhaustion, dread, fear, anger, sadness, humiliation, disillusionment, lust and finally love... see I told you not to feel sorry for her. Very entertaining story that's got angst, a murder which resulted in a bloody battle with the Cats, sizzling chemistry, lots of 'claiming' as the 'mating thrall' kicks in and then, well then they all wait for the results.

Told from three POV's by a narrator who could easily cope with all the characters and their emotions in the story which was told in a six book series and, even tho it did have a happy ending, it seemed a bit cut off and a 'to be continued' storyline so, after eagerly and hopefully checking on VR's website.... ta da! standing up and clapping with glee, there's going to be another book released this month.

Worth a credit? New Werewolf lore with two hunky huge Alpha wolves and two sexy romances which would make any PNR lover's tail wag (hot but not erotica) and hopefully there's more to come.... so this book, for me, was a howling success and very creditworthy.

What a challenge to be claimed by 2 Alphas

I always love a good werewolf love story book. I did find it interesting that the author did include 2 alphas of the same pack in this book. Though I normally prefer a female narrator, I do feel the narrator did an amazing job reading the book.
Mila, who at a young age had a fascination with werewolves, now as a young adult did not hesitate to volunteer to be given to the Lazarus pack as a mate. Mila was not aware that the Lazarus pack was run by 2 Alpha who were named Asch and Tye . Tye and Asch were best friends and had been friends for a long time.
Mila who did not know what she was getting into was supposed to choose which one to mate with. Both alphas would feel the need to mate with her when her body was ready. The alphas would fight to the death to have her. Would they come up with a solution that one of them would not have to die? Could 2 Alphas live together in harmony after this is all over? Would Mila ever be expected by the pack? Want to know the answer read the book and find out.

Could you imagine having two alpha's. When is the lottery coming to my town because I volunteer! Good book. For once I found a book that the main character is not a whining twit.

It was a new twist on a werewolf love story. I was surprised that it worked and now I can't wait to hear the next story in the series .

Would you consider the audio edition of Claimed by the Alphas: Complete Edition to be better than the print version?

I enjoyed hearing it this time around. I had read the series on my own. This time around I felt like I was watching a movie in my mind.

I love Ashe. He is level headed and sincere. Very romantic and loving. He too has a bad side that I like.

What does Michael O'Shea bring to the story that you wouldn’t experience if you just read the book?

I like the way that he changes his voice.

I really liked hearing the audio version of this story. I had previously read the books and this was like revisiting an old friend. The narration was different than the voice in my head when I read the story and it took me a few chapters to be okay with it. Overall, I thought it was good. I would definitely recommend this to anyone who wants to hear a non typical werewolf story.

Would you listen to Claimed by the Alphas: Complete Edition again? Why?

Yes, it is a story I have read and re-read many times but it is quite long. That is why I chose to purchase it on audible. The performance by Quinn Bernard is pretty decent, the characters are recognisable from the 'voices' Quinn does. Caim is done well, but at times I am not so sure about Ashe. Sometimes I feel his tone is too flippant. Overall though I enjoyed listening to this book very much. Can't lie though, I really hated the french accent Quinn did. When I first started listening I had forgotten about the excerpts from the book Milla brought with her was a part of the book. I nearly returned it until I remembered.

I am not sure I have a favourite character. There was no one that stood out to me in this book as someone I loved hearing about, although thinking about it the one I liked the most would be Caim. I liked his brutal honesty and, at times, his emotional ignorance. I liked how he never changed to suit anyone but himself.

The scene I enjoyed most was just after Milla's pregnancy was confirmed and Milla asked Caim if he would stay with her until she fell asleep, after saying no- in a roundabout way while not really saying it, he agreed to be there when she woke up. I like little intimacies like that.

No, it didn't make me cry. I laughed a few times; Caim's reactions to various things, such as Dawn not kicking him when she was in Milla's stomach was quite entertaining.

This book didn't really have many cliff-hangers out moments when I was on the edge of my seat but I think, in a way, thats why I liked it so much. It was realistic while obviously being fantasy. I would definitely listen to it again.