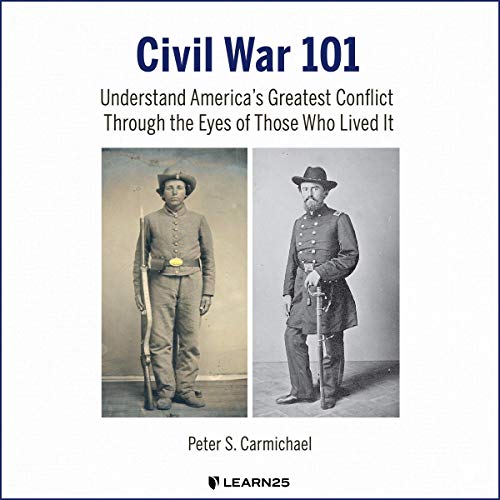 Civil War 101: Understand America’s Greatest Conflict Through the Eyes of Those Who Lived It

Join one of the Civil War’s greatest living historians in exploring this monumental event through the eyes of those who lived it.

Imagine yourself living amid the bloodiest conflict on American soil. An infantry soldier marching into the Gettysburg battlefield in the front lines. A Minnesotan mother whose son responds to Lincoln’s call for volunteers. A slave working the fields of a Mississippi plantation when rumors of Emancipation arrive.

Drawing on the letters and records of individual soldiers, this compelling audio course invites you to explore the relationship between events on the battlefield and life on the home front. With more than 600,000 casualties, the Civil War cannot be understood by looking exclusively at famous figures like Abraham Lincoln, Robert E. Lee, and Ulysses S. Grant. As you’ll see, ordinary people — volunteer soldiers, runaway slaves, civilians in both the North and South — shaped the course of history. Hearing their stories illuminates the causes, consequences, and course of the war.

Your guide is Peter S. Carmichael, Director of the Civil War Institute at Gettysburg College and author of The War for the Common Soldier (2018).

Throughout, you’ll pay special attention to the men who served in the ranks on both sides. You’ll conclude by looking at the diverse ways that Americans continue to find political relevance in their Civil War past.

This course is part of the Learn25 collection.

What listeners say about Civil War 101: Understand America’s Greatest Conflict Through the Eyes of Those Who Lived It

The Skipped Facts of the American Civil War

World War 3 is a trend while listening to this course. Whoever supports the war, you are wrong. War is ugly and unnecessary. I mean why millions die because a bunch of leaders cannot sit together and negotiate.

I hate wars. However, I believe that it is one of our basic instincts. Wars will continue no matter how smart we are going to become. We will keep developing weapons and fighting each other.

The American Civil War was one of the most important historical events that changed the course of history forever. We all know the story; slavery, the outbreak, Lincoln, etc. However, what we do not know is the people who were fighting in this war. These soldiers are the persons mentioned on the cover of this course; they are the ones who shaped America’s greatest conflict.

Peter managed to discuss the war from a very different perspective. He discussed how the communities lived before the war, how the war began and ended, and the war itself from the soldiers’ perspectives.
Normal people are the fuel of wars; people like me and you. Peter did a great work by shedding the light on us.
Now, I feel like I know the whole story of the American Civil War.
Thanks, Peter!

Carmichael is one of my favorite Learn25 presenters. He was the perfect choice to present this type of series, considering he runs the Civil War Institute at Gettysburg College. I found his stories about soldier's everyday lives refreshing, and a nice departure from the endless names and dates you sometimes hear historians rattle off. Highly recommend this one for any one who wants to get a sense for the defining conflict of American history.

Was this sacrifice needless?

Peter is one of the biggest history buffs I've heard of. You can hear the awe and joy in his voice as he explores a topic that he clearly loves. This product explores the Civil War in a very in-depth analysis and review of the US Civil War.

He spent years working at and around many of the historic sites, so has a personal connection (and even recommendations on which to visit) to the locations.

An interesting look at the people in the Civil War

This is an enjoyable course that I would recommend to anyone interested in the American Civil War, or American history in general.

It seems like many sources try to take in this period on the grand scale: the movements of armies, the interactions and strategies of generals, Lincoln and other politicians of the time--the movers and shakers, so to speak. While this series of lectures does cover those topics well, where I think it truly shines is in its elucidation of the common man.

The truth of the matter is that most people in the Civil war were not generals or politicians. Peter Carmichael candidly explores the experiences and perceptions of day-to-day soldiers through their own words from letters and such sources. This paints an interesting portrait of the soldiers at once familiar to the modern listener, and yet surprisingly different in their understanding of virtue, the war they fought, and the world around them.

An enjoyable presentation with plenty of food for thought.