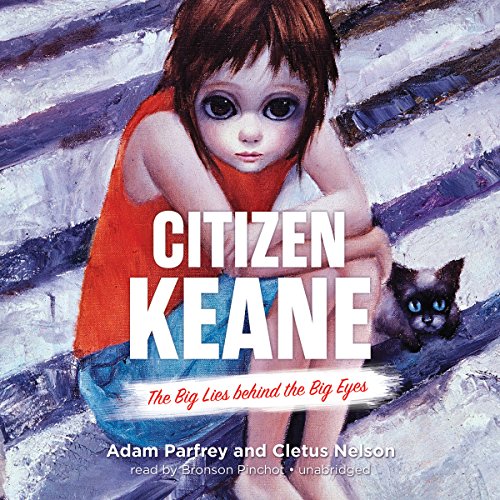 By: Adam Parfrey,Cletus Nelson
Narrated by: Bronson Pinchot
Try for $0.00

Teary, big-eyed orphans and a multitude of trashy knockoffs epitomized American kitsch art as they clogged thrift stores for decades.

When Adam Parfrey tracked down Walter Keane - the credited artist of the weepy waifs - for a San Diego Reader cover story in 1992, he discovered some shocking facts. Decades of lawsuits and countersuits revealed the reality that Keane was more of a conman than an artist and that he forced his wife, Margaret, to sign his name to her own paintings. As a result those weepy waifs may not have been as capricious an invention as they seemed.

Parfrey's story was reprinted in Juxtapoz magazine and inspired a Margaret Keane exhibition at the Laguna Art Museum. Director Tim Burton made a movie about the Keanes called Big Eyes, which came out in 2014.

What listeners say about Citizen Keane

Interesting expansion of the movie

I really enjoy books on art and artists as well as movies on this topic. I liked the 'Big Eyes' movie a great deal and was looking for a book to tell the rest of the story. This book, although short, did a good job of filling in the gaps in the movie and explaining inconsistencies in the Keane story. I greatly enjoyed this book. It was a quick listen that told both sides of the story (although skewed toward favoring Margaret). If you liked the movie and like books about the lives of artists this is worth the 3+ hours.