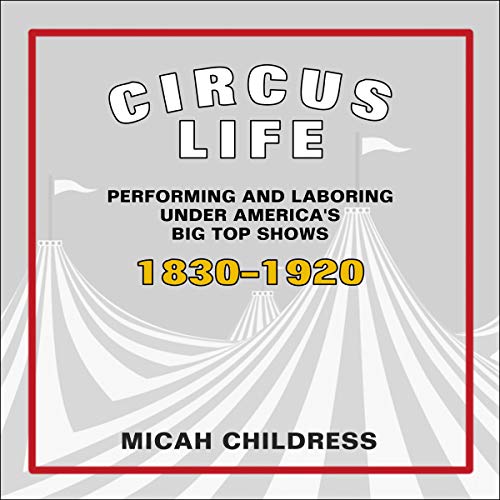 By: Micah D. Childress
Narrated by: Scott Carrico
Try for $0.00

The 19th century saw the American circus move from a reviled and rejected form of entertainment to the “Greatest Show on Earth.” Circus Life by Micah D. Childress looks at this transition from the perspective of the people who owned and worked in circuses and how they responded to the new incentives that rapid industrialization made possible.

The circus has long been a subject of fascination for many, as evidenced by the millions of Americans that have attended circus performances over many decades since 1870, when the circus established itself as a truly unique entertainment enterprise. Yet the few analyses of the circus that do exist have only examined the circus as its own closed microcosm - the “circus family.” Circus Life, on the other hand, places circus employees in the larger context of the history of US workers and corporate America. Focusing on the circus as a business-entertainment venture, Childress pushes the scholarship on circuses to new depths, examining the performers, managers, and laborers’ lives and how the circus evolved as it grew in popularity over time. Beginning with circuses in the antebellum era, Childress examines changes in circuses as gender balances shifted, industrialization influenced the nature of shows, and customers and crowds became increasingly more middle-class.

As a study in sport and social history, Childress’s account demonstrates how the itinerant nature of the circus drew specific types of workers and performers, and how the circus was internally in constant upheaval due to the changing profile of its patrons and a changing economy.

What listeners say about Circus Life