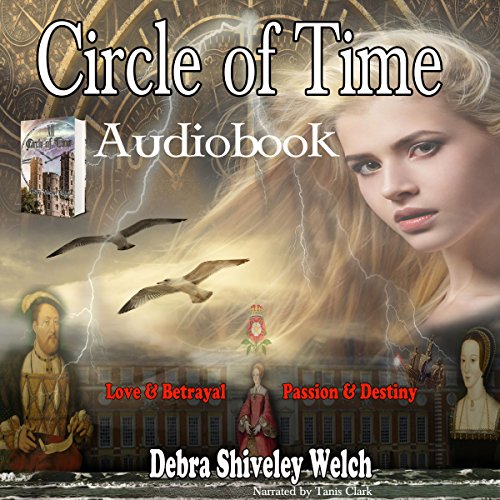 By: Debra Shiveley Welch
Narrated by: Tanis Clark
Try for $0.00

Based on historical facts, Circle of Time weaves the story of time traveler Bridget Littleton, Henry VIII, Anne Boleyn, and Bridget's ancestor Sir John Lyttleton into a dramatic and fascinating tale of love and betrayal.

A student of Tudor history for 50 years, author Debra Shiveley Welch tells the story of Henry VIII and Anne Boleyn as she truly believes they were, and unravels the complexities of Henrician politics.

When 21-year-old Bridget Littleton decides to borrow her father's yacht and sail off of the tip of Florida toward Bermuda, she discovers that the legends about the Bermuda Triangle are true.

After seeing a face in the ocean waves, her next memory is of spinning water and blackness. She awakens in the town of Bristol, England, in the year 1532.

Rumors of her beauty reach the court, and soon Bridget, known as Bridge, finds herself in the court of Henry VIII and Lady in Waiting to none other than Anne Boleyn.

Will she get out alive? Will she accidentally change the course of history, or is she indeed a part of the history she has studied since she was a little girl?

What listeners say about Circle of Time

This was a good book. but you have to be patient with the music, it was kinda to long I kept thinking it was the end of the book . The songs the character sang were good songs. I would like her husband to have more interaction in the story because I feel he was a big key in her life of happiness that she said she had with him