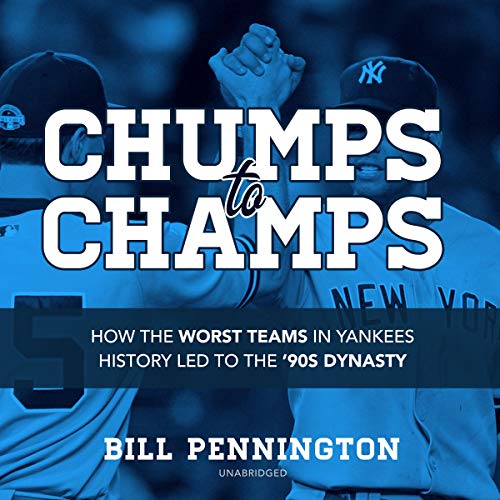 By: Bill Pennington
Narrated by: Christian Baskous
Try for $0.00

The untold story of the time when the New York Yankees were a laughingstock - and how out of that abyss emerged the modern Yankees dynasty, one of the greatest in all of sports

The New York Yankees have won 27 world championships and 40 American League pennants, both world records. They have 26 members in the Hall of Fame. Their pinstripe swag is a symbol of "making it" worn across the globe. Yet some 25 years ago, from 1989 to 1992, the Yankees were a pitiful team at the bottom of the standings, sitting on a 14-year World Series drought and a 35 percent drop in attendance. To make the statistics worse, their mercurial, bombastic owner was banned from baseball.

But out of these ashes emerged the modern Yankees dynasty, a juggernaut built on the sly, a brilliant mix of personalities, talent, and ambition. In Chumps to Champs, Pennington reveals a grand tale of revival. Listeners encounter larger-than-life characters like George Steinbrenner and unexplored figures like award-winning manager Buck Showalter, Don Mattingly, and the crafty architect of it all - general manager Gene Michael, who assembled the team's future stars - Rivera, Jeter, Williams, O'Neill, and Pettitte.

What listeners say about Chumps to Champs

Superb retelling of the Yankees return to Glory! Great story, with Steinbrenner, Showalter, Jeter, Rivera, O'Neill, and Yankees! A+ Narration, too!

Not a Yankees fan

I am not a Yankees fan. I had relatives who lived in Brooklyn. They loved the Dodgers. You weren’t allowed to watch Yankees games, especially if the announcer was Scooter Rizzuto.
I live in Arizona, but I am not a fan of the Diamondbacks.
With all this being said, I enjoyed listening to all the information about the great Yankees rookies and the temperament of Buck Showalter.

It brought back and into some good insight of Yankees ... and the hard times dealing with management decisions and how “ The Stick” input on the 90’s Greatness!! 🏆👍

A MUST READ FOR ALL

Yankees and baseball fans. A wonderful telling of the worst Yankees teams in 1990, 1991 to end the decade as the team of the 90s. The author gives you a brilliant story told by those who lived it how the Yankees franchise went from chumps to champs. Just a great summer read.

What an incredible book. Must listen to for anyone who is a baseball or Yankees fan. Great detail and stories about how the dynasty came to be.

If you're a Yankees fan that lived through the 90's, this is an absolute must-listen. It's the type of book that will make you LOOK FORWARD to your commute, or job, or any other thing you do where you get to listen. just an unbelievably enjoyable listen for any Yankees fan.