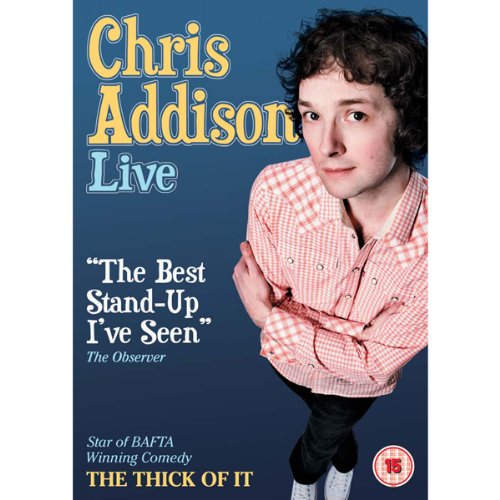 Ooh, look! Chris Addison – star of BAFTAs-winning 'The Thick of It' and 'In The Loop', 'Mock The Week' regular, 'Live At The Apollo' and 'Have I Got News For You' type person, evil headmaster off 'Skins' and host of E4’s 'Show & Tell' – has made a show of his critically acclaimed stand-up for the first time. Innit.

Recorded live (obviously) at London’s Bloomsbury Theatre following a massive sell-out tour, Chris Addison Live is a blisteringly funny experience. Although you won’t actually get blisters. That’s just an expression. But you can find out for yourself why so many people think Chris Addison is the wittiest, most hilarious (not to mention sweatiest and gangliest) comedian around as he blathers on about subjects from the personal to the, y’know, not so personal in his own unique, highly entertaining, sweaty and gangly style. Daftness! Whimsy! Jokes! Lies! Smartarsery! Flapping about! All present and correct. *The ‘street’ term “innit” here used in an attempt to attract looting youths.

not as good as on tv but still funny

Still a great laugh but I find he has such good facial expressions and a brilliant stage presence that without seeing him as in audio books its lacking something. Still really funny