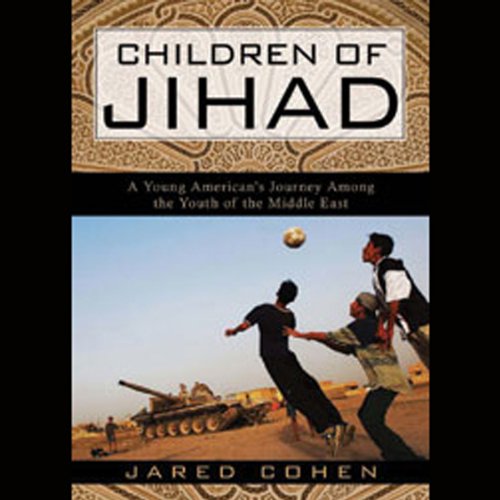 By: Jared Cohen
Narrated by: Jason Collins
Try for $0.00

Classrooms were never sufficient for Jared Cohen; he wanted to learn about global affairs by witnessing them firsthand. While studying on a Rhodes Scholarship at Oxford, he took a crash course in Arabic, read voraciously on the history and culture of the Middle East, and in 2004 he embarked on the first of a series of incredible journeys to the Middle East. In an effort to try to understand the spread of radical Islamist violence, he focused his research on Muslim youth. The result is Children of Jihad, a portrait of paradox that probes much deeper than any journalist or pundit ever could.

Written with candor and featuring dozens of eye-opening anecdotes, Cohen's account begins in Lebanon, where he interviews Hezbollah members at, of all places, a McDonald's. In Iran, he defies government threats and sneaks into underground parties, where bootleg liquor, Western music, and the Internet are all easy to access. His risky itinerary also takes him to a Palestinian refugee camp in southern Lebanon, borderlands in Syria, the insurgency hotbed of Mosul, and other frontline locales. At each turn, he observes a culture at an uncanny crossroads: Bedouin shepherds with satellite dishes to provide Western TV shows, young women wearing garish makeup despite religious mandates, teenagers sending secret text messages and arranging illicit trysts. Gripping and daring, Children of Jihad shows us the future through the eyes of those who are shaping it.

"This young gutsy writer knows that the East-West struggle is being fought over the café tables of the Near and Middle East." (Chris Matthews)

What listeners say about Children of Jihad

I enjoyed every minute of this audiobook and learned a tremendous amount about the Middle East, a topic that has always baffled me. Cohen makes it come alive by recounting his own experiences in the countries and his friendships and conversations with the youth. There are many surprises in this book -- and cause for great hope. The youth of the mid East are fascinated by America, and tuned in via internet and satellite TV. Cohen made me feel as if I were there, making friends along with him.

I recently saw that Cohen is now working in the U.S. government. I think he is uniquely equipped to further peace efforts in this region of the world.

Haven't stopped talking about this book

There are so many people who have not been to the countries Cohen describes his experiences in. Political enthusiasts and armchair foreign policy academics would be well-advised to listen to Cohen's observations and anecdotes so they can base their perspective on some level of interaction and history rather than the political drivel of journalism written by non-adventurers. While reading about the status of other people and other governments I learned about the quality of my own government. These stories are inadvertent mirrors and to some degree a warning to not discount the importance of the desires of a generation that repeatedly gets overlooked when we discuss the whims of governments. I wish more people had the persistent curiosity Cohen did and would meet strangers in their comfort zone, seek emotional connection, and ask probing questions about their perspectives and history. I have more to talk about now with the next Iranian, Iraqi, or Syrian I meet than "what do you think of the news". After you read this, you don't get to be a garden variety dumb American.