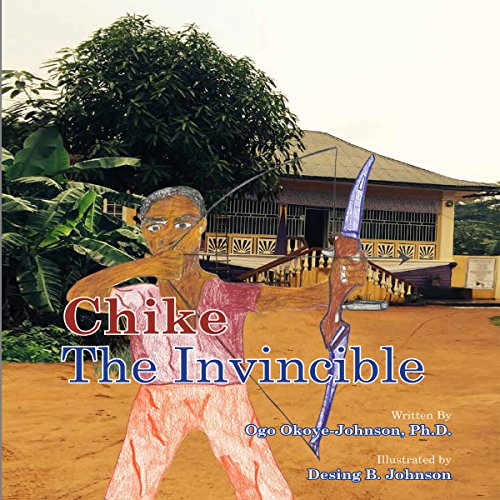 By: Dr. Ogo Okoye-Johnson
Narrated by: Elizabeth Garrett
Try for $0.00

Chike the Invincible is a story book in the folktale genre that illustrates the indomitable human spirit while teaching lessons in perseverance and valor.

In the mighty village of Awor lived a valiant young boy named Chike. Chike grew up under the loving care of his famous father, Ike and his mother, Chi-Chi. Ike, the powerful and rich chief of Awor, wins the biggest yam and the archery competition year-after-year during the annual New Yam Festival. The contest, held by him and the chiefs of Ifiteh, Abah, Iboloh, Opih, Ireh, and Emeri, the seven villages of the town of Orai, taught Chike the sport of archery.

Chike follows in his father s footsteps and successfully competes in the archery competition. Ike falls into a trap laid by his jealous brother Obi during an archery competition and dies from his injuries. After his father's untimely death, Chike and his mother move to his mother's village. Here his uncle, Obi, declares himself chief of Awor. He banishes them from the chief's compound.

While in exile, the chief of Abah annexed Awor after a border battle led by his uncle Obi. Chike called on Awor's warriors to join him and defeat Abah. With the help of Awor's warriors, Chike is victorious in the battle and restores peace. Awor villagers are happy to be free from Abah's dominion.

In appreciation and gratitude to Chike for his valiance, Awor villagers installed Chike as their rightful chief. Chike the Invincible transports listeners to a village full of valor, poetic justice, and intrigue.

What listeners say about Chike the Invincible