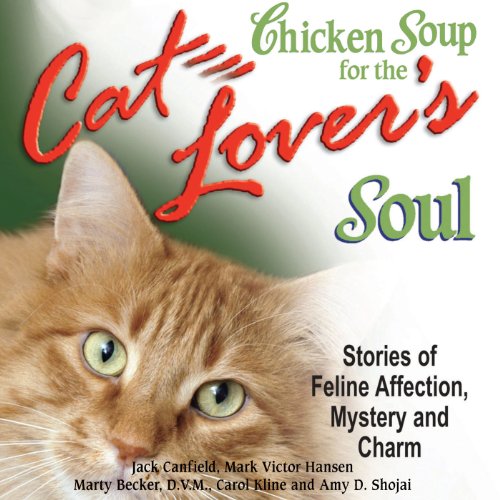 From playful and hilarious accounts of life with cats to heartwarming tales of cat courage, healing and learning, each touching story in Chicken Soup for the Cat Lover's Soul celebrates the special bond we share with our cats.

What listeners say about Chicken Soup for the Cat Lover's Soul: Stories of Feline Affection, Mystery and Charm

Enjoyable, but the stories vary a lot in quality

I'm a huge cat lover, owning cats all my life, and currently have 3. So this book was a no-brainer for me. I have to say that overall I'm a bit disappointed. Maybe 1 story in 3 in this book I found to be very moving or interesting or enjoyable. Many of them though are either annoying because they are as much about the owners ignorance or stupidity as they are about a noteworthy cat, or they are simply so mundane that don't really hold much interest.

For example, many go like: clueless first-time cat owner gets cat, lets cat out, cat gets run over by car, owner gets sad and nostalgic about how great cat was. GRRRR! Or else the story is about some other cat-related catastrophe which a non-brainless cat owner would have easily avoided. One of the stories was about (and by) an owner who was openly hostile to the cat, and it ends with the cat doing something helpful for her and because of that she finally accepts the cat. Huh? What kind of story is THAT? I honestly felt like that owner didn't learn a thing by their own story, and is basically a pretty awful person.

Ok, some of the stories are great, memorable, and very moving. Many tears were shed by me in listening to such stories. But you have to grit your teeth through a bunch of the other ones to get to them.

Yea, sure, cat lovers should get this, I suppose, but it would be 3x as good if they were a bit (no, make that WAY) pickier about the inclusion of some of the really mundane or infuriating stories.

The reader is fine, but unlike just about every other book that is read by an audible reader, she only uses "her own voice". So for example you'll listen all the way through a story where she is reading it, and at the end it will be by "Frank Grimes" and it'll be like DOH! I would have liked to know that was a GUY while listening to the story.

I love cats. I think that they make windeeful pets. I have enjoyed listening to all these warm wonderful stories.

These stories are wonderful. Someone left me misty eyed. Some provoked tears of laughter.
The narration performed by Marcie Millard is absolutely stellar! I am now searching for other books simply for her narration.

My husband is legally blind and has had several strokes. After his third stroke we adopted a kitten that has been the light of his life. This book really hit a chord with him. The stories were short, uplifting and about cats! The narrator brought so much to this book. Her enthusiasm spills over. What a wonderful book! Definitely a keeper and one that we'll listen to again and again!