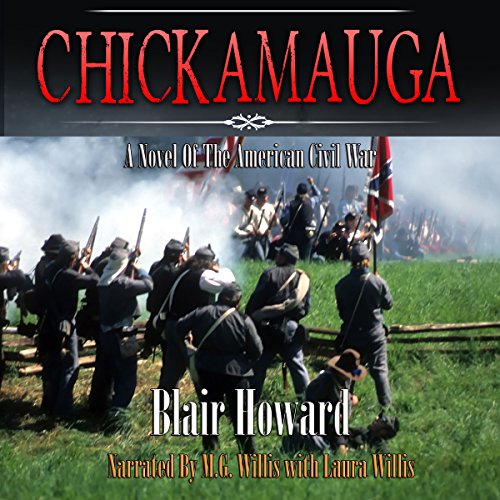 Chickamauga - A Novel of the American Civil War - is the story of a great battle of the Civil War and the people who fought it, many of them real and some of them the product of the author's imagination. Chickamauga is a story of the heroism, selflessness, and frailty of the men whose deeds are etched forever on the fields and forests at Chickamauga, the River of Death. Chickamauga is the story of the generals who planned the grand strategies that would be played out by lesser but braver men, and it's the story of heroism, desperate deeds, and death and destruction on a scale the like of which had never been seen before.

Chickamauga is the story of Jesse Dixon and Patrick McCann, two boys in blue uniforms who must grow up before their time, and of Billy Cobb, a Confederate soldier who found himself at war, not only with the Union enemy, but also with his conscience. And it's the story of Sarah Bradley, the daughter of a Southern farmer, and Blake Winter, the Yankee colonel who fell in love with her. Chickamauga is the story of ordinary people in extraordinary times.

What listeners say about Chickamauga

Absolutely the best Civil War novel I have found!

I will start this review by saying I love Blair Howard's work and have read or listened to six of his books to date. I find him to be an entertaining and knowledgeable author and "Chickamauga" is no exception. The book is incredibly well-researched and historically accurate. But the addition of Michael Willis as the narrator makes this audio book even more exceptional. To say "reader" or "narrator" does not adequately describe the work. Michael's performance is nothing less than spectacular! Blair has given us a detailed look at the Battle of Chickamauga from not only the generals and soldiers points of view but also from a civilian perspective. Michael Willis and his wife Laura flesh-out the characters with a skill I have never experienced in an audio book. I live near the battlefield and I visit there often but this work has changed the way I think about the conflict and the participants. My thanks to both the author and the performers for an unforgettable experience.

What a Terrible Price War

The wasre and devastation and terrible loss of life suffered during the Civil War is brought to stark reality. The courage of the men and boys and women is well illustrated. Also, the utter futility of war!

Be Prepared for a long but interesting story

I found this story very interesting, disturbing and at times almost brought me to tears. Mr & Ms. Willis do an astounding job again at bringing the story to life as they play the role of the different characters. I do have to admit that I got lost with all the names of the different people that are involved at this battle for Chickamauga so I mostly listened to keep track of whether they were on the Union or Confederate side. I like that Mr. Howard added some characters of his imagination to add a touch of romance and to give the characters a life outside the war. This book is very long as the author breaks some of the days down to hourly time slots of what is happening on each side of the battlefield. Whether it be to have us listen in on the tension of the talks between generals, sargents,, or the gentleman riding back and forth taking messages to the front lines. It does seem to run on quite a bit but I don't think anything could be done about this or you might miss something important in the battle. This is also a very sad story, so many lives lost and it seems like neither won, as some of the things they were fighting are still in our headlines today.
I received a free code from the publisher to be able to listen to this book. I was not asked for anything in return, this review is my own honest opinion.

I am so happy that I got this book, unbelievable to know of such a battle. Yet another great book from Blair Howard and the Willis is. I recommend this book, I think everyone should read i,?you don’t know what goes on until somebody puts it in print. Thank you to the author and the narrators

Having read The Mule Soldier, which was fascinating and brought a era of time in our history. to life for me. One is captured again with the setting, as though you also are looking thru the field glasses of what is going on. The battle, the men, their fears, and the death. The account was meticulously in detail, giving us the best description of a time we only heard of in passing. The research done, must of taken. years, and very well done. History buff or not will find this an enjoyable story to read.
Given audio which added a lot to this story for my voluntary review and my honest opinion

This is a superb mix of a factual battle and fictional conversations.
It is easy to imagine how much the petty jealousies hindered the Confederacy.
M.G Willis is amazing at the battle scenes .
I received a free copy of this audio book at my own request and voluntarily leave this honest review.

This is a great fiction book with some facts. It pulls you along nicely into the story, keeps your interest at all times. I found it hard to put down & some times read longer int6o the night.