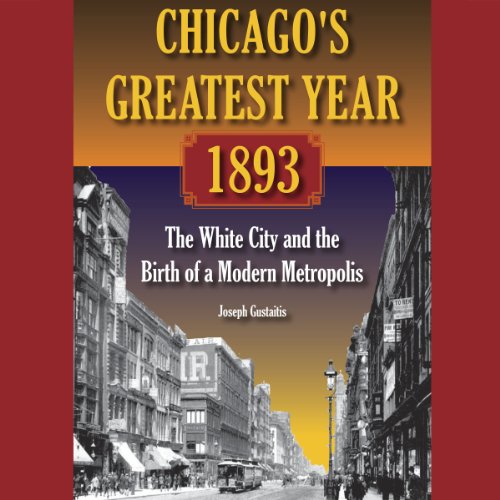 By: Joseph Gustaitis
Narrated by: Fred Filbrich
Free with a 30-day trial

In 1893, the 27.5 million visitors to the Chicago World’s Fair feasted their eyes on the impressive architecture of the White City, lit at night by thousands of electric lights. In addition to marveling at the revolutionary exhibits, most visitors discovered something else: beyond the fair’s 633 acres lay a modern metropolis that rivaled the world’s greatest cities. The Columbian Exposition marked Chicago’s arrival on the world stage, but even without the splendor of the fair, 1893 would still have been Chicago’s greatest year.

An almost endless list of achievements took place in Chicago in 1893. Chicago’s most important skyscraper was completed in 1893, and Frank Lloyd Wright opened his office in the same year. African American physician and Chicagoan Daniel Hale Williams performed one of the first known open-heart surgeries in 1893. Sears and Roebuck was incorporated, and William Wrigley invented Juicy Fruit gum that year. The Field Museum, the Art Institute of Chicago, and the Museum of Science and Industry all started in 1893. The Cubs’ new ballpark opened in this year, and an Austro-Hungarian immigrant began selling hot dogs outside the World’s Fair grounds. His wares became the famous “Chicago hot dog.”

“Cities are not buildings; cities are people,” writes author Joseph Gustaitis. Throughout the book, he brings forgotten pioneers back to the forefront of Chicago’s history, connecting these important people of 1893 with their effects on the city and its institutions today. The facts in this history of a year range from funny to astounding, showcasing innovators, civic leaders, VIPs, and power brokers who made 1893 Chicago about so much more than the fair.

This is an excellent book!

I really enjoyed this book a lot! It is a really interesting way to treat a history of a city.