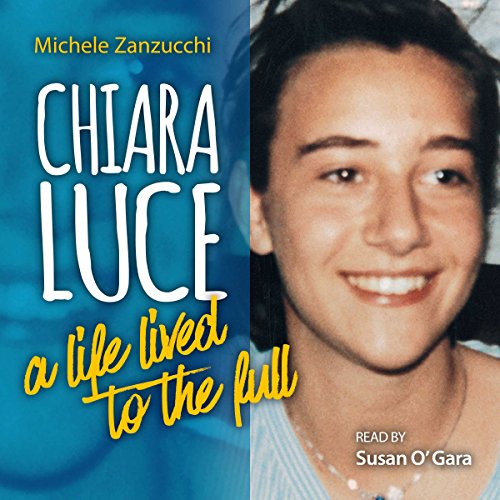 A Life Lived to the Full
By: Michele Zanzucchi
Narrated by: Susan O'Gara
Length: 1 hr and 44 mins
Categories: Bios & Memoirs, Religious Figures
4.5 out of 5 stars 4.6 (5 ratings)

Chiara Luce, a girl full of vitality, suddenly fell gravely ill. And, strangely, moment by moment, a new life full of light began to unfold for her. She was 18 when she died, yet she had lived to the full.

On September 25, 2010, Chiara Luce was beatified by Pope Benedict XVI and is now known as "Blessed Chiara Badano". Each generation has its stories of heroism and holiness, which then become models for those coming after them. Yet these young people who have gone to the next life were not aloof or idealized; they have not become “icons”, to use the current terminology. They were just going on ahead of the others to another place, where they all eventually hope to meet up again.

This is the story of the life of Chiara Luce Badano, a life lived to the fullest.

A well-read, inspiring story especially for today’s youth/young adult. I strongly recommend this book and intend to listen to it again myself!

A story that can change your life

A clear, comprehensive and moving account of Chiara Luce's life. I recommend it to anybody looking for a meaning in their suffering, especially young adults.

This is a beautiful, inspiring story of a young woman wise beyond her years. An inspiration for young and old alike.

Amazing story about what it means to be transformed by Love

I can’t believe that she’s only few years older than me. She was able to understand fully what it means to be loved by God and how transformative this love can be!