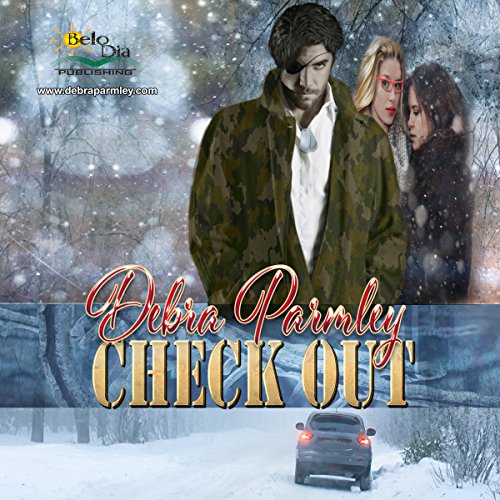 By: Debra Parmley
Narrated by: Talece Brown
Try for $0.00

When Marine veteran Nash Ware walks into the library where shy librarian Betsy Bobbin works, she's intimidated by the handsome man who wears an eye patch and an attitude. Her car has a flat in a storm, and Nash comes to her rescue. A fight outside a bar between an angry Nash and a drunk frightens Betsy. She's fallen for him, but is it safe to fall in love with a wounded veteran with PTSD? Betsy is torn. Will love and trust win out over her fear before it's too late?

Nash has found the girl of his dreams, but his wounds run deep. His ex-fiancé was repulsed by his eye and his eye patch, and manufactured drama like bees do honey. However, real drama surrounds Betsy when a stalker comes after her sister.

What listeners say about Check Out

I did not like the narrator. She did not sound young enough to be portraying the character. Her voice was too gravelly. I pictured the character to have a light voice with a southern accent.

This was a short listen that was entertaining. I enjoyed the story line. The characters were written nicely. Betsy was a bit flighty at times but I still enjoyed her.

Betsy is a shy librarian that gets the shock of her life when Nash walks into her library. Nash is a very handsome ex marine that has a chip on his shoulder and an eye patch that he doesn't think any woman can see past, but that is not the case with Betsy. She finds him fascinating and is even more intrigued with him when he comes to her rescue on multiple occasions.

Thanks to family drama that Betsy must deal with, his PTSD and lack of self confidence in himself, things get a bit tangled up. Throw a stalker into the mix, and you have a mini, action packed 4 hours of good listening time. Do I wish there had been more meat to the story? Yes, I always like lots of info, details, and dialogue. But, I will say, for such a short listen it had high entertainment value.

Written as a multi pov. This is a stand alone and does have a HEA.

So... Would I recommend this book? Yes

Would I read more from this this author? Yes

I loved this story. From the start when Betsy first meets her hero to the very end! It was well written. I loved that I could see in my mind where they were going because I have been to some of the same places myself.
I have read this book a while back and loved it then. This narrator had the southerners accents which went well with the setting! One thing I didn't like was that she made Betsy a tad bit whinny, more then I thought she was when I read the book myself.
Besides that it was fun to listen to this story and have it come alive!

What did you love best about Check Out?

How the hero comes to the rescue a number of times!

I would love to listen to the whole book in one sitting but I never have that much time!

I enjoyed the story for the most part. The sisters did drive me a little bit crazy, but not enough to not finish this book. It took me a bit to get use to the southern belle mentality & the hearing it spoken. If I was reading this book, I definitely wouldn't have thought the accent would be that defined. All in all it kept in entertained while I painted the bathroom.

This sweet romance was a refreshing change from what I usually read or listen to. I found it a bit more like real life than most of the romances I read. My favorite character was the hero, Nash. I loved his sweet, romantic gestures and his protective nature. Betsy's sister, Leann, and her stalker added suspense to the plot.

I enjoyed the narration and found the southern-accented voice to be soothing and interesting to listen to.

I would recommend this to readers who like clean, sweet romances.

This was the first book of Debra Parmley's that I have read or listened to. I like her writing style and character development as I became involved in their lives and at times wanted to yell at them with some good friendly advice. I believe you'll enjoy it as much as I did.

Yes it was. While I do wish the author has fleshed out parts of the story for the whole I liked it.


Would you be willing to try another book from Debra Parmley? Why or why not?

Would you listen to another book narrated by Talece Brown?

yes as she is a decent narrator but could use some work as I'm not sure if she recorded this is in quiet room as I swear at one point it sounded like a blender was working in the background.

I love happy endings especially for our military heroes! Good way to pass the time on a trip. Narrator's accent seemed to change a bit while doing the same character, but I still think she did a good job.

I would recommend the book but not the audio due to the narrator who did not suit the book.

The female narrator had what I would call a sensual voice. I had to check the cover of the audio to make sure I downloaded the right book! I kept thinking I was listening to an erotica when in fact it was a sweet romance.

This book was on my TBR list, so when it was given for free I jumped at the chance. I read the reviews on the book and I noticed it did not get a lot of stars. However this did not put me off since I like the description of the book and I wanted to give it a go.

I loved the story itself. It is a sweet romance about Nash and Betsy and how they come to trust each other. I liked the fact that Nash did not give up even with all the obstacle in the way and I liked him more for trying.

There is swearing (sporadic) and sexual content (mild). It was more sensual then graphic (which happened behind closed doors).

The only thing that spoilt it for me was the narrator! She did not suit this type of book. I cringed every time I listened to it, which was a shame because I thought it was a good book. I would definitely recommend the book to those who love sweet romance with a hint of tension. But this has not put me off listening to audio books because I love listening while doing other things at the same time! I would recommend you listen to the sample first before you decide to buy the book. This way you get a feel for the narrator.

The story line is OK. There is a good base for a great story but the heroine kept annoying me. I only lasted 8 chapters before I had to stop and that was with forcing myself to keep listening. The female characters were whiny and aggravating, they were also repetitive in thought.

I can see that with work the story could be great but I just couldn't bring myself to finish it. Sorry