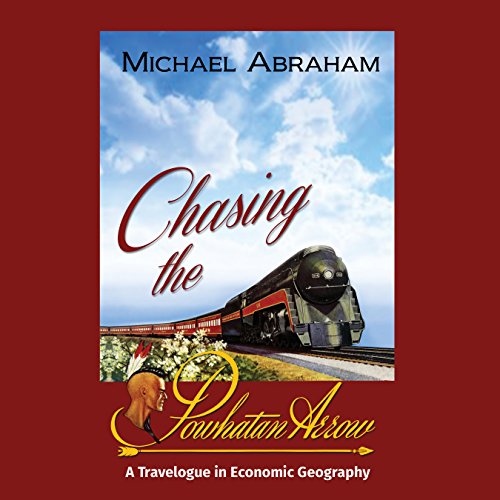 By: Michael Abraham
Narrated by: Dave Cruse
Free with a 30-day trial

From its inception in the 1880s, The Norfolk & Western Railway primarily carried freight but as a sideline, it always provided passenger service. A profitable, well-run company, N&W only accepted the very best.

As World War II ended, N&W offered several named trains along its main line, including the Cavalier, the Pocahontas, and its daytime flagship the Powhatan Arrow. Pulled initially by the magnificent Class J steam locomotives that N&W manufactured at its Roanoke Shops, the Powhatan Arrow provided fast, luxurious, and memorable service for three decades before passenger service was discontinued, giving way to automobile and airplane travel nationwide.

The corridor traversed by the Powhatan Arrow is a wonderfully complex, geographically fascinating, socially diverse, and economically mixed path through Virginia, West Virginia, and Ohio. The vicissitudes of time have endowed the communities along the way with a broad spectrum of fortunes, branching from prosperity to failure.

With railroads no longer carrying passengers, Michael Abraham duplicated the route as closely as possible by car, motorcycle, bicycle, and even canoe, gathering each area's history and culture and profiling entrepreneurs, historians, railfans, and everyday people in this enlightening, humorous look at a swath of America's past, present, and future.

What listeners say about Chasing the Powhatan Arrow

I got this book for free in return for my review. I was hesitant about requesting it to begin with, but I'm glad that I did. Not only was it an enjoyable listen while I was working at my computer writing curriculum for my courses, but I actually learned something. It's not just a travelogue: there is so much rich history built in that I didn't know. Coming from this region myself, I now have fun facts stored up to whip out when needed. If you enjoy travelogues that have a healthy dose of history, this book is for you.

Would you listen to Chasing the Powhatan Arrow again? Why?

Yes, it embodies a time in the U.S. that is appealing. We worked hard and enjoyed our families, America WAS great. Not just a political slogan.That was the gist of what I got out of the audio book. Americana, travelogue, Railroad, interwoven with personal nostalgia!

What other book might you compare Chasing the Powhatan Arrow to and why?

In the same vein of some of Studs Terkel work. In that it looked at why the rail road in that region meant so much to prosperity, growth, lifestyle, etc.

Have you listened to any of Dave Cruse’s other performances before? How does this one compare?

First that I am aware of. But he did an exceptional job! He seemed to have done his research, has a very good voice, good pronunciation, and in my opinion got across what the author's intention was. That really added to the work overall. Perfect choice!

In my opinion, this is well worth the Audible credit and listening time!

Thanks for the opportunity to listen and offer my opinions on this work!

A review copy was gifted to me at no charge. In return, I am happy to provide an honest review. Also at no charge.

All Aboard for History Lessons!

What does Dave Cruse bring to the story that you wouldn’t experience if you just read the book?

David Cruse, as narrator, was a phenomenal first class conductor on this journey. No one else could have replaced him.

A remarkable travelogue of time told through the route of The Powhatan Arrow. Some history takes place decades or centuries before the railroads, some during, and of course, the dismal demise of ruined communities, struggling in the aftermath of its height.
Most of the conversations with the public was knowledgeable and academically sound, interesting, and insightful. A handful -although it could have totalled about two hours' worth, were not conceivably entertaining and held no value to the history or pertained to the outcome of the railroads. First that comes to mind is the young couple of differing religions and their struggles with their marriage. So, the editor did fail by allowing that anecdote to be included, by the author's apparent plea.
Human faith and commitment to prevail and rebuild these towns were remarkable and consistent. The passion to find or create silver linings to breathe life back into these declining and almost forgotten towns create hope and inspiration to anyone who ever wanted to make a difference.
It is disheartening that Petersburg was insignificantly represented by a panhandler, two persons who were not well versed in its history, and a transplanted schoolteacher. In late 2016, the city was first to be known to have filed bankruptcy. Incidentally, it did used to have a Heilig Meyer Furniture store (mentioned in another town, with its history), located on Washington Street, which Sycamore crosses. And the Appomattox River was probably located less than a quarter mile from Bolling Street, which would have tied in or added to the stop at Appomattox. Was there another historical angle this could have rooted?
David Cruse, as narrator, was a phenomenal first class conductor on this journey. No one else could have replaced him.