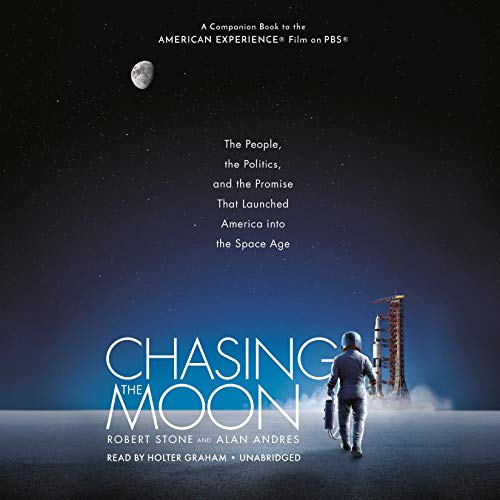 By: Robert Stone,Alan Andres
Narrated by: Holter Graham
Try for $0.00

JFK issued the historic moon landing challenge. These are the stories of the visionaries who helped America complete his vision with the first lunar landing 50 years ago.

A Companion Book to the AMERICAN EXPERIENCE® Film on PBS®

Going in depth to explore their stories beyond the PBS series, writer/producer Robert Stone - called “one of our most important documentary filmmakers” by Entertainment Weekly - brings these important figures to brilliant life.

In 1961, President John F. Kennedy proposed the nation spend $20 billion to land a man on the moon before the end of the decade. Based on eyewitness accounts and newly discovered archival material, Chasing the Moon reveals for the first time the unknown stories of the fascinating individuals whose imaginative work across several decades culminated in America’s momentous achievement. More than a story of engineers and astronauts, the moon landing - now celebrating its 50th anniversary - grew out of the dreams of science fiction writers, filmmakers, military geniuses, and rule-breaking scientists. They include:

Setting these key players in the political, social, and cultural climate of the time, Chasing the Moon focuses on the science and the history but, most important, the extraordinary individuals behind what was undoubtedly the greatest human achievement of the 20th century.

“Chasing the Moon is rich, lively, and deeply human - a thriller of its own to parallel PBS’s American Experience series on the moon program.” (Richard Rhodes, Pulitzer Prize- and National Book Award-winning author of Energy: A Human History)

“Chasing the Moon tells the story I've lived for most of my life. From my testing of the lunar module on Apollo 9 to my hopes for the future as we celebrate Apollo’s fiftieth anniversary, it’s all there, and told through the personal experiences of the people who lived it. Some of it familiar, some never told before, this is a very human account of a truly historic moment as humankind emerges into the larger cosmos.” (Russell “Rusty” Schweickart, astronaut, Apollo 9)

“Designed to be a companion volume to a documentary film, Chasing the Moon is so informative and so entertaining that it can easily stand on its own as a popular history of the Space Race. Stone and Andres capture not only the Cold War rivalry and turmoil of the period, but its heady optimism.” (Joseph Kanon, New York Times best-selling author of The Good German)

What listeners say about Chasing the Moon

Fifty years ago I was 12 years old at the time of the Apollo 11 moon landing. I had a poster of the Apollo 8 iconic image of the blue earth against a black sky on the wall of my room. It was an exciting media event and I had no concern that the mission would not be a success. As one of the approximately 600 million people with access to a television watching the broadcasts at the time, I was unaware of how many things could go wrong; unaware of the risks, unaware of just how remarkable the attempt and subsequent success was to put men on the moon, less than 10 years after the manned space flight program began.
This story behind the NASA moon program, written by Robert Stone and Alan Andres, tells the compelling back story of the science fiction visionaries, politicians, engineers, bureaucrats, astronauts wives, who all worked to get the Apollo astronauts to the moon and back. From early Sci Fi pulp fiction and Godard’s early rocket experiments to the Soviet and US space programs, this back story is told in the context of the social, technical and political history of the twentieth century. Chasing the Moon is a fascinating narrative, truly the Viking Sagas of our age.
I thoroughly enjoyed this book and look forward to the coming documentary with the same title. Narrator Holter Graham does a great job narrating.