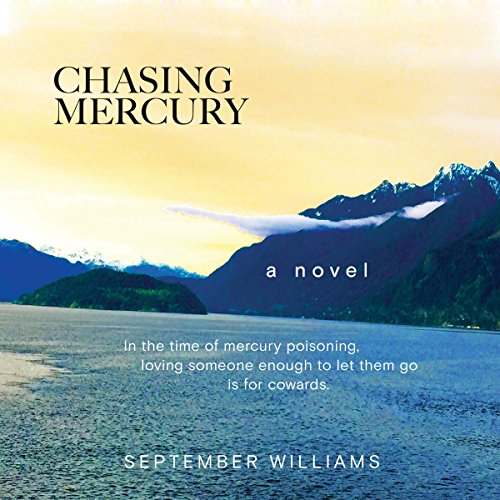 In the time of mercury poisoning, loving someone enough to let them go is for cowards. An epileptic black ballerina and a whistleblower Powwow dancer meet in the Montreal Airport. They are both scheduled to perform in Berlin, 1973 Cold War Berlin. During the transatlantic crossing, their love evolves. On a long lay over in Zurich, he stuns her by depositing many hundreds of thousands of dollars into his Swiss bank account, to which he adds her name with no true explanation. Is she an accomplice or is this just love in the time of mercury poisoning?

Chasing Mercury is a soaring cross cultural, romantic suspense saga about families devoted to human and environmental rights. The novel honors the 2017 ratification of the United Nations Minamata Convention on Mercury, and its going into force as international law. Chasing Mercury is the first of a series of three books.

This book is educational in the look at mercury poisoning. The premise of the book pulled me in. The story spans over 40 years. Some of the characters I found intriguing, while others held no appeal. Parts of the book I really enjoyed, and other parts not so much. I don't think I connected to the narrator, as I kept hearing distracting mouth noise and there was not any distinguishable character voices. This book isn't performed, but just read. I requested this review copy audiobook and have voluntarily written this review.

Would you listen to Chasing Mercury again? Why?

"Chasing Mercury" is a cinematic journey on the page! Brimming with African American and First Nation culture and history, this romance-suspense-saga teaches as it entertains and pirouetting in the center of it is a passionate love affair that keeps the pages turning and without a doubt will keep eyeballs glued to the movie screen. ~ Monice Mitchell Simms, Screenwriter-Filmmaker, Sociolinguistic Storyteller and Author of the novel, "Address: House of Corrections."


I bought this book because I met the author and being an author, myself, I wanted to support her. I expected to like the book and write a mild, non-committal review. Boy, was I wrong! September Williams has written a terrific book! Not only did I enjoy the storyline and the characters, but also, I loved the way she captured the feeling of the 50’s, 60’s and early 70’s, especially for Native Americans and People of Color. Read this book and you’ll be entertained as you learn something about the environmental struggles as well as the racial struggles of that time, which sadly, continue today.
This book is worth your time! I’m looking forward to the sequel.

Fascinating suspenseful romance. September Williams does an amazing job keeping you hanging on to her every word. As you travel the world throughout the story, you are so enraptured you feel as if though you are traveling with the characters themselves. Eagerly anticipating the next book in this series.