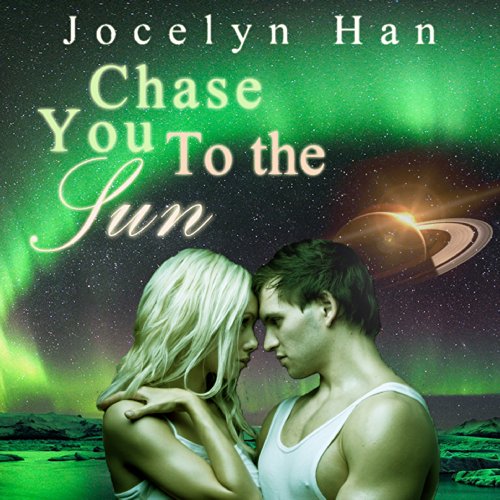 Chase You to the Sun

Chase You to the Sun

When Svetlana Ivanova lands a job on Desida One as trade liaison for the Russian Elite, she is over the moon. Even though her rich father owns the largest gemstone mine in the solar system, Lana wants to make it under her own steam. Working on one of the Desidan space stations is a dream come true.

Things take a turn for the worse, though, when she and her friends Tori and Alen are attacked by rebels on their way to Earth. Bruce Randall, a notorious space pirate and her father's worst enemy, kidnaps her to hold her for ransom. If Mr. Ivanov doesn't pay up, she'll get hurt - badly. Bruce may have a handsome face, but his soul is darker than the night. Or so he claims, anyway.

Locked up in a mansion in an unknown location on Earth, Lana's world slowly begins to unravel. Bruce is not just holding her hostage for money - in fact, he tells her things about her father's company that she can't believe. The pirate seems to know more about her mother's death, five years ago, than she was ever told. And his kisses may be dangerous, but too good to resist.

Lana comes to realize that beneath the villainy and violence, Bruce is a man very different from the character in the stories told about him. A man with crushed ideals and a past haunting him everywhere he goes, no matter what he does.

A man she could fall for.

*Given free copy in exchange for an honest review.

As mentioned in the description of this book, there are scenes that are for mature audiences only, so if you are of the faint of heart I would not recommend this for you. But if you like your romance hot, steamy and a little on the edge then this is the book for you.

Ms. Han makes the thought of living in outer space real in these books and I liked Ms. Huso's narration of both books 1 and 3.

I am anxiously waiting for book 4 just to see where the story goes next.

Bad Boys Are Oh So Good

Have you listened to any of Melissa Huso’s other performances before? How does this one compare?

Consistent and awesome as ever

This whole series is amazing. This story is hot and steamy. So glad they went back to the first narrator, she does an awesome job of bringing it to life. I hope Ms Hahn has more planned.

What made the experience of listening to Chase You to the Sun the most enjoyable?

The sex scenes were hot!!! I loved the narrator's voice. I found it to be soothing. There is no way I could have pronounced all those names or Russian words.

What was one of the most memorable moments of Chase You to the Sun?

When I learned the moon was being mined by children!

Have you listened to any of Melissa Huso’s other performances before? How does this one compare?

I don't think I heard this narrator before. I thoroughly enjoyed listening to her. It takes talent to be able to speak the Russian names so well & some phrases.

I did indeed listen to this all day today! It was that good!

This book is almost there but not quite as to character development and choices. One particular situation stood out to me.

Let me preface by saying that I love captive romance, which by its nature involves some form of violence. However, there is also resistance by the heroine. Here, he punches her straight in the face - this is after they have spent half the book together and been intimate. And right after she tells him he’s a good man! Wha, what?! No anger, no pride, no space. I don’t get that at all.

Narration was good - she played the heroine as clueless and almost spacey, which is how she comes across in the book.

I wouldn’t go out of my way to recommend this book.

I just can't get into this one

Would you try another book from Jocelyn Han and/or Melissa Huso?

Narration was fine.She was able to read this book better than half of the books I have in my library right now. I haven't been able to get through a half of a chapter after six punishing attempts at it. As for the author, she has the capacity to write stories. Just needs that umpf with the content to be great.

What was most disappointing about Jocelyn Han’s story?

The girl comes off like an air head. She's been in school but she lacks any common sense and all she goes on about is how sexy her captor he is, and how he's too sexy for his own good, or how all she can think about is how all she can do is think about how sexy he is when they're in the same room together, or how wet he makes her. It goes on and on, you gt the picture.

She even manages to smuggle a phone in and gets two attempts to call AND connects with her friend (Oh, whose boyfriend happens to be a former close associate with her captor/terrorist. Possible trust issues here?). At the end of her second call, they talk about who they'll hook up for dates when she gets back from her abduction. WHAT? I can't stomach this story for too much more if it keeps going like this with this lead bimbo behaving like she's got a faulty air valve in her head.

What does Melissa Huso bring to the story that you wouldn’t experience if you just read the book?

Like I stated above, narration was fine. Problem is I don't think it was a good match for this story. She adds the perfect touch to the image I see when I think of the lead female character as being an airhead.

Do you think Chase You to the Sun needs a follow-up book? Why or why not?

As it going right now. NO... Kill it before the pandemic of virgin airhead Zombies can spawn any offspring.

Seventh time is the lucky number, right? One more attempt... I think I can push myself to commit to. Here's praying.

If you could sum up Chase You to the Sun in three words, what would they be?

Out of this world

I am convinced that we have reviewed some books unfairly and it's Not our faults!! It's the authors agents and publishers who choose the narrators for their authors and with an audio book the narration is everything. Especially in this genre, if you happen to be a woman!
Melissa Huso, may well be in her twenties or thirties, I have no idea, but she sounds like she could be my grandmother's age. I don't know about you, but the last thing I want to hear coming my grandmother's mouth is sexual conversation.It just doesn't work! So, I beg, and I mean BEG those who choose on behalf of their authors~~~BE WISER!!
I liked the theme of this book because it's futuristic with people having the ability to travel all over the world and most importantly, Space. It's done in a described time when people can travel to moons that encircle other planets and they can even destroy those moons if they so choose to. The struggle is political in this book. There isn't a firm, workable Government established (oh, right, Much like it is Today) well, anyway, The commoners are attempting to stand for their rights and the main male character Bruce is a future Robin Hood and an activist for the people all in one. It's a government where 90% of it's inhabitants are the so called 'commoners' and the other 10% are called the Elite. The author took a bit of our nations struggles and used it as those problems plaguing the future. For example, slavery is being used to harvest gems from caves that will only allow a person who is small to reach them, and so one group of people whose children fit the bill are used! So on, and so on, history repeating itself. This is why I gave the story four stars. The narrator was a bad choice for this book and it's my opinion that a younger, strong and more voice changing reader would have made Jocelyn Han's book one that we the listeners would have appreciated more. It's my belief that if agents/publishers are going to offer audiobooks as a profitable medium for the authors that employ them, then they MUST play a closer role in listening who they choose, and base their choices on what the Author is trying to convey to their readers.
I did listen to this entire book. The draw for me again, was the story line and it's to Jocelyn Han all create is due.
You may be risking your credit or money if you listen to this book. I hope my review of it will in some way help you make your decision. ~~~Wray Mona~~

With each book, the series seems to get better and better. Chase You to the Sun is an entertaining, steamy, charming story with fabulous characters. The plot is well-developed and the world-building, imaginative. Not a big fan of Melissa Huso's narration, I found myself distracted from wholly enjoying the audiobook. Aside from the performance, I thought this was a great sci-fi romance. I received a free copy of this audiobook at my request and have voluntarily left this review.