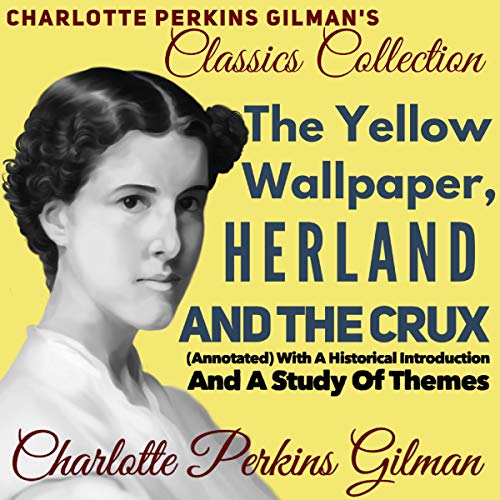 Charlotte Perkins Gilman Classics Collection: The Yellow Wallpaper, Herland, and The Crux: (Annotated) with a Historical Introduction and a Study of Themes

Unique to this title are:

Charlotte Perkins was born in 1860 in Connecticut. When she was a child, her father abandoned his wife and children, and she spent the rest of her childhood in poverty. Since her mother was not able to support the family, her aunts played a big part in her upbringing.

Her schooling was erratic, and she attended seven different schools in just four years, finishing when she was 15. To prevent her children from getting hurt as she had been, her mother forbade them to make strong friendships or read fiction. Despite that, Gilman spent a lot of time in the local library studying ancient civilizations on her own.

In her best-known work, The Yellow Wallpaper, Gilman writes about different kinds of oppression that women were exposed to at the time. Women were patronized and treated as mentally weak and fragile. They were believed to be prone to many “nervous conditions” and particularly hysteria.

Herland is a utopian novel from 1915, written by feminist Charlotte Perkins Gilman in which exists an isolated society composed entirely of women, who reproduce via parthenogenesis (asexual reproduction). The result is an ideal social order: free of war, conflict, and domination.

The Crux tells the story of a group of New England women who move west to start a boardinghouse for men in Colorado. It is an important early feminist work that brings forward complicated issues of gender, citizenship, eugenics, and frontier nationalism.

What listeners say about Charlotte Perkins Gilman Classics Collection: The Yellow Wallpaper, Herland, and The Crux: (Annotated) with a Historical Introduction and a Study of Themes

Circumstances right now prevent me from writing an extensive review. I will update my review as soon as I am able. I’mI previously listen to the Yellow Wallpaper and Herland and shall copy and paste those reviews.

These books were written well before their time but because of that they become important novels in the history of women’s suffrage. The books are not just groundbreaking conceptual pieces but they are original and truly entertaining. The narrator delivers some amazing performances across these three books.