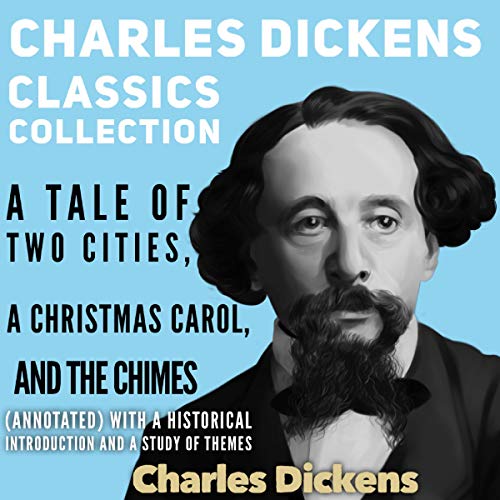 Charles Dickens Classics Collection: A Tale of Two Cities, A Christmas Carol and The Chimes

Unique to this title is:

Charles Dickens was an English writer and social critic. He was born in 1812 in Portsmouth. When his father was sent to jail because of unsettled debt, Dickens had to leave school and get a job in a factory.

Although he lacked formal education and never had a chance to finish his schooling, Dickens successfully edited a weekly journal for 20 years, wrote 15 novels, five novellas, hundreds of short stories and non-fiction articles, gave lectures and performed readings, and lobbied passionately for social reforms in general, and children's rights in particular.

Dickens is believed to be the best novelist of the Victorian era and he became very popular during his lifetime. His novels are still widely read and translated.

A Tale of Two Cities is a historical fiction first published in weekly installments in 1859. The plot takes place in London and Paris between 1775 and 1792.

Eighteenth-century France and England are both ruled by fear and oppression. The upper classes live in luxury while common people suffer and starve. However, there is a difference.

The novel starts with the words, “It was the best of times, it was the worst of times” and we soon learn of the major difference between the two countries.

In A Christmas Carol a mean old man named Ebenezer Scrooge sits at his office on a cold Christmas Eve. His clerk, Bob Cratchit, shivers with cold because Scrooge refuses to spend money on heating. Scrooge's nephew, Fred, visits him and invites him to a Christmas party, as he does every year.

Two gentlemen drop by and ask Scrooge for a contribution to their charity. Scrooge reacts to both his nephew and the two gentlemen with bitterness and venom.

Later that evening, after returning to his dark, cold apartment, Scrooge is visited by the ghost of his dead partner, Jacob Marley.

The story of The Chimes concerns a working class man who comes to believe that he is worthless and worries that working-class people are wicked by nature. On New Year's Eve, some goblins show him visions of what will become of his loved ones if they are allowed to continue believing that they are worthless and wicked.

What listeners say about Charles Dickens Classics Collection: A Tale of Two Cities, A Christmas Carol and The Chimes

it says this is optional

If you've never read or seen the movies, everything is given away before hand.

The audiobook contains some of Charles Dickens’ best books. Each book is worth reading and the narrators each do the books justice. This is a must have for Dickens’ fans.

This is a must have for any fan of Dickens. It contains three of his best works. Each story is adds more and more to this book. The narrators do fantastic jobs telling this classic tales. They really draw you into the fantastic stories.