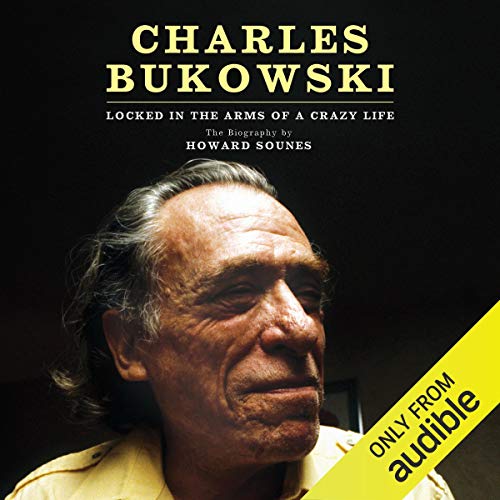 The American writer Charles Bukowski (1920-94) developed a cult following for his simple and vivid poems, stories and novels based on his experiences as a hard-drinking postal worker in Los Angeles. His classic books include Post Office, Women and Love Is a Dog from Hell.

In this engrossing biography, studded with excerpts from Bukowski's writing, Howard Sounes tells the true story of Bukowski's life in the same punchy style as his subject. Sounes draws on interviews with all the significant people in Bukowski's career, including celebrity friends Robert Crumb, Allen Ginsberg, Norman Mailer, Sean Penn and Mickey Rourke, who played Bukowski in the movie Barfly.

Bukowski's editor and publisher, John Martin, praises the book: "Locked in the Arms of a Crazy Life is a generous tribute to Bukowski's genius, and it clearly and truthfully captures the essence of Bukowski both as writer and man."

Howard Sounes is known for writing detailed and revelatory biographies of a range of extraordinary personalities, including the murderers Fred and Rosemary West (Fred & Rose) and the musicians Bob Dylan (Down the Highway) and Lou Reed (Notes from the Velvet Underground). For more information, visit www.howardsounes.com.

What listeners say about Charles Bukowski

Someone should have stepped in. This man should never “perform” his writing. His attempts to affect accents is embarrassing and his voicing of female and gay characters borders on offensive. I had to increase the speed just to make it through. Never had such an awful listening experience on Audible. If he writes another book, please, do us all a favor and decline his offer to read. Wow.

One of the greatest biographies I've ever read. Well composed and researched book. Sounds a lot like Bukowski!

Enjoyed immensely. Inspired to read more, after blindly taking on the general picture of Bukowski as an untalented drunk misogynist.

The Dirty Adventures of Mr. Sixpack

Oh, what an extraordinary biography this fellow had written! It catapulted me right to the L. A. of the 30's and on so vividly I could feel the smell of Bukowski's armpit! He was probably a massive pain in the ars, but this book is better than any novel I read the previous year. Bukowski is among the few American authors I am able to read, but I had no clue how remarkable his personality was. This biography made me feel every aspect of the life and times to the bone. Very well written and exciting.
At first I thought I listen to some generated voice, but I grew to love the author's narration very quickly. My next pick will be his bio about Lou Reed, an other obscur American idol.

Insightful story but truly appalling narration . One to avoid .

There is no doubt Howard Sounes is a gifted
writer and researcher . I very much enjoyed reading this book years ago and looked forward to hearing it . Unfortunately Howard’s narration is truly awful . Writing and narrating are different skills and what Howard has as a writer he lacks woefully as a performer . His voice isn’t engaging . He is unable to sustain accents . When doing an accent of Bukowski ‘s mother he strays into embarrassing racial stereo typing . Howard’s Bukowski impression is irritating . It truly grates on the ear. This wonderful book in the hands of a skilled narrator could have been brilliant . Unfortunately as an audio book it’s one to avoid . It’s sad as Bukowski’s words are magical but they need to be voiced in the right manner and this isn’t it .

Great book about a great man!

The best source of information on Bukowski's life! Very well performed by the aurhor. Highly recommended.

Awonderful biography, the style of which is reminiscent of the man himself. Narration extremely irritating.

A must read for any fan

Absolutely brilliant, thank you so much Howard for this incredible portrayal of Bukowski. I loved his writing before but now my enthusiasm has been rekindled and enhanced and I'm planning on reading everything I can find of his! I won't forget this book, ever! That is the power of literature.

The real story behind the poems

As a big fan of Bukowski's writing I found this to quite interesting to hear the real names of a lot of the characters from his books and poems and how some of the stories were altered for more poetic effect. I really enjoyed it a lot and want to search out more work by Howard Sounes.