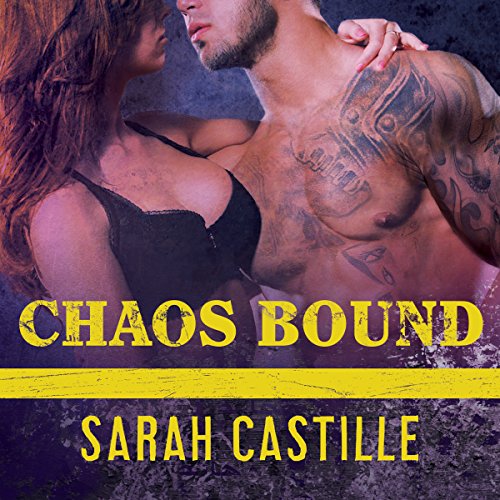 By: Sarah Castille
Narrated by: Carrie Brach
Try for $0.00

After enduring months of torture at the hands of the Black Jacks MC, and betrayed by his own club, Holt "T-Rex" Savage, a junior member of the Sinner's Tribe Motorcycle Club, will stop at nothing to get revenge. But falling for a beautiful woman with dangerous ties to his sworn enemy was never part of the plan.

Raised by the Black Jacks, Naiya Kelly grew up fast, furiously, and with little to lose. But now that she's put her MC days behind her, she is free to do what she wants - until she meets a man who imprisons her, body and soul. She swore she'd never give her heart to a biker, but Holt is the most passionate, protective man she's ever known. But will Holt be forced to betray his one true love to exact his revenge?

" CHAOS BOUND is an emotional and heartbreaking story.... the characters are colorful, animated and inspiring; the romance is a second chance at life, love and a happily ever after." (The Reading Café)

What listeners say about Chaos Bound

There have ever only been two authors that have written a book that could move me to tears 😢... Now there are three. This was such a gut wrenchingly bittersweet edge of your seat BEAUTIFUL story. My husband cracked up as he watched me pace back and forth in our room yelling at the air and characters during the last twelve chapters. SOOOOOOOO good! I can't believe it's over 😢... Now I NEED TANKS STORY. I truly hope this hiatus is just the author trying to make sure it's Epic.

It was so exciting!

I really loved this series. I couldn't put it down. I read them back to back. I hope there are (or will be) more. There are more members to follow.

I wish this wasn't the end

T-Rex was thought dead, but some men are harder than you think. At least Tank knew something wasn't right.

I will not give any spoilers, but I am sad that I have no more Sinner books to listen to. More... please.

I Loved it! There wasn't a dull moment in the book and the ending was perfect.

this is the best story. love it so much very much. amazing love story the best out of the series.

Best book by far. I loved it!!!!!
Need more book like this one.
I did prodict a lot of it but I loved the curve balls in this book.

Love Holt's story but.did not like the Narrator should have used the same Narrator as the 3 previous books

A raw, gritty, and intense story. This story has the perfect amount of action, intrigue, suspense, and of course romance. Naiya and T-Rex(Holt) met during a dark time and embark on a thrilling journey. Their chemistry is undeniable, and their connection is sweet. I absolutely enjoyed this book.
Narration was great.

I really enjoy this author and the series that I just read. I look forward to reading more books by this author.