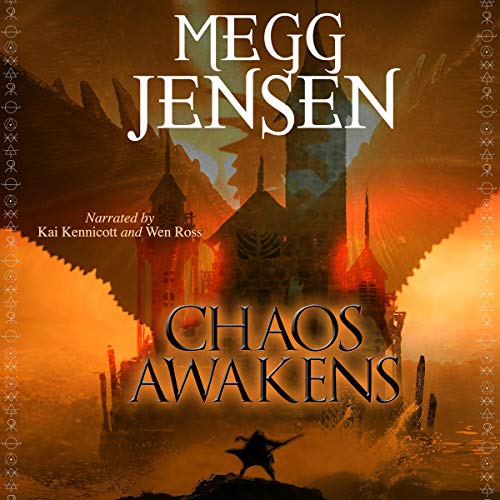 By: Megg Jensen
Narrated by: Kai Kennicott,Wen Ross
Try for $0.00

For hundreds of years, the orcs and humans of Doros have shared an uneasy peace. It shatters in an instant with the botched assassination of a human priest in the orc capital. Hell-bent on revenge, the humans take up arms as the orc monarchy crumbles from outside interference.

Now, Tace, the unlucky assassin, is on the run. It's soon clear, however, that her mistake hasn't only precipitated a war. It's unleashed ancient powers, the stuff of legends, and fireside tales - and not the cozy kind.

Tace has always worked solo, but to save Doros, she'll need to assemble the unlikeliest allies. Together, they'll unravel the mysteries of the orcs' cult of death, and in the process, Tace will come to question everything she's ever believed. Only one thing is certain: A great destiny awaits her - if she can live long enough to meet it.

Chaos Awakens is an epic fantasy spanning multiple continents. Orcs, humans, elves, fauns, dwarves, and dragons fight for dominance in a new fantasy world sure to spark the imagination of fans George R. R. Martin’s Song of Fire and Ice series and Robert Jordan’s Wheel of Time series. Written by USA Today best-selling author Megg Jensen, Chaos Awakens is the first novel in the new series Dragons of the Nether.

What listeners say about Chaos Awakens

Wen and Kai have knocked it out of the water with this narration. The voices and tones provided for each character stand out on their own throughout the story. This is a great fantasy read that incorporates both humans and Orcs together as they head into a battle. We’re taken on the journey with the main characters for an unbelievable ride but the side characters are wonderful as well. The storyline flowed smoothly and at a consistent pace that kept me interested and wanting to know what will happen next. Although this is book one only, I feel as though we’re provided with a good amount of closure on these characters. I will definitely be looking into the next book in this series in the near future.

Wen Ross and Kai Kennicott did an amazing job narrating this story. There was such a wide variety of characters for them to portray. They were able to make each character distinct to help the listener along. The book itself started off slow and was hard to get a grip on, but I'm glad I stuck with it because in the end it was a great story! Jumping into book to now.

I loved this book. It started slow but it did turn out to be a great read.