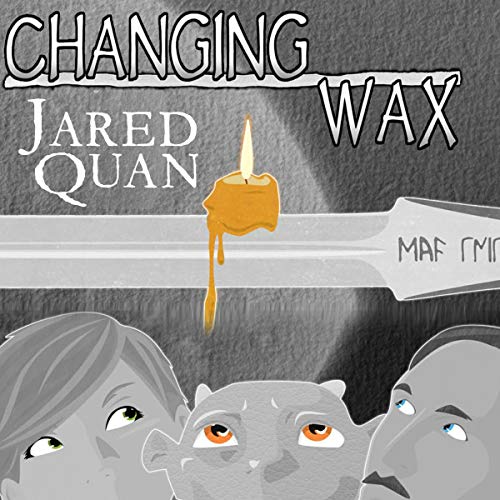 By: Jared Quan
Narrated by: Rebecca McKernan
Try for $0.00

Changing Wax is an action-adventure comedy, taking place in the fantasy world of Wax, which resides just 762,522,000,005 light years from Earth (give or take half a light year depending on Earth’s rotation). Wax revolves around rules established in the ancient Master Book of Magic, rules that don’t always follow basic logic or sanity.

The story follows three adventurers: Gorath the misfortunate monk who can’t seem to get anything right, Odd Drip the Imp who is too smart for his own good, and Thomas Twostead, a teenage girl born on the wrong side of Wax’s never-ending war between Light and Dark. In the end, their teaming up might decide the fate of the world, while seemingly defying the will of the Master Book of Magic. Or are they...?

What listeners say about Changing Wax

Did you like the hitchhikers guide to the galaxy? This one has a similar feel but with more plot. My family laughed out loud, a couple of times. We didn't care for the narrator (she seemed to have a fake British accent and didn't have much variety in character voices). Plus I was expecting an American narrator with an American authored book.

I couldn't finish it. Stopped listening for a few days and when I started again, could not remember the plot. The voice actor's voice is so painful that I could not get back into it. There may be an interesting plot in here. but it was obscured by the screeching that always went flat at the end of a sentence.

Sorry performer, you've got to do some voice exercises or something.

A fun read that keeps you listening. The Hitchhiker’s Guide meets Advanced Dungeons and Dragons.

A fun and often funny tale of three-plus friends. These underdogs take on a rather silly and confused world!

It'll keep a hold of you until you turn the last page!