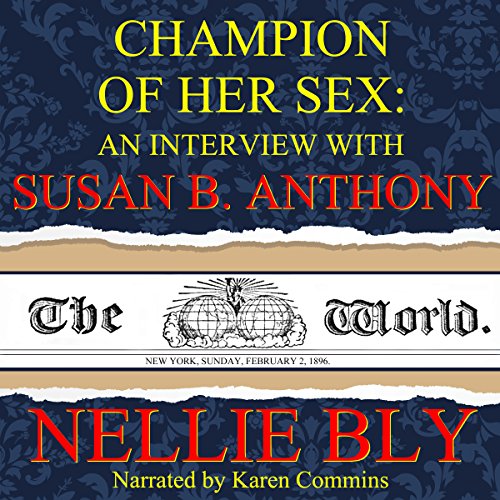 Champion of Her Sex

By: Nellie Bly
Narrated by: Karen Commins
Try for $0.00

Nineteenth-century reformer Susan B. Anthony advocated for many causes, including limitations on alcohol access and abolition of slavery. However, she is best known for her tireless efforts as a suffragist seeking equal and civil rights for women. Nellie Bly was a courageous and feisty female reporter for Joseph Pulitzer's The World newspaper in the late 1800s.

In this landmark interview, Anthony discusses her history in several areas of social reform. She talks at length about her work in the women's suffrage movement. She also offers commentary about women's dress reform and bicycling, two hot topics of the time.

This audiobook was created to coincide with the 120th anniversary of the publication of a very interesting conversation between two of the most remarkable women in American history.

What listeners say about Champion of Her Sex

this doesn't even play. theres nothing there... literally paid 4 bucks for 0 content. not even "this is audible"

A great peek into herstory...

What about Karen Commins’s performance did you like?
Upon looking closely at this work,one finds that Karen Commins has brought this work to life of her own accord. How great to know that this was a labor of love and admiration for 2 great her-storic voices!

Any additional comments?
This would be a great piece to share in educational settings - the length and content makes for easy family and/or classroom discussion.