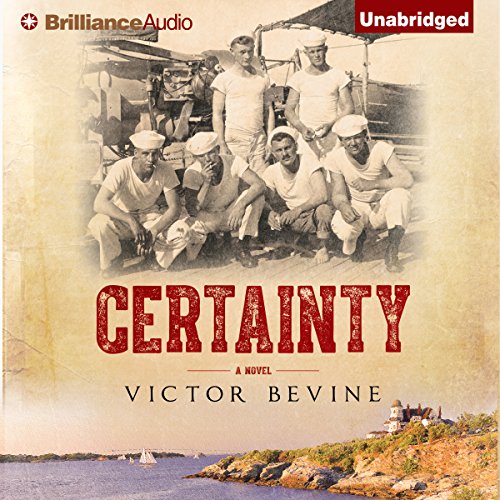 When you're fighting an injustice, can it be wrong to do what's right?

Inspired by the scandalous true story that shocked a nation at the close of WWI.

With America's entry into World War I, the population of Newport, Rhode Island, seems to double overnight as 25,000 rowdy recruits descend on the Naval Training Station. Drinking, prostitution, and other depravities follow the sailors, transforming the upscale town into what many residents - including young lawyer William Bartlett, whose genteel family has lived in Newport for generations - consider to be a moral cesspool.

When sailors accuse a beloved local clergyman of sexual impropriety, William feels compelled to fight back. He agrees to defend the minister against the shocking allegations, in the face of dire personal and professional consequences. But when the trial grows increasingly sensational, and when outrageous revelations echo all the way from Newport to the federal government, William must confront more than just the truth - he must confront the very nature of good and evil.

Certainty recalls a war-torn era when the line between right and wrong became dangerously blurred.

Victor Bevine delivers a fast moving period piece that tests his character's (and reader's) idea of Certainty. The author's eloquent prose, dynamic plot and struggling characters pull the reader swiftly through the story and into your own analysis of Certainty. In a time when many cling to black or white thinking, Bevine offers us a vivid world of grays that push the boundaries of love.

Bevine's brilliance as a writer is only eclipsed by his prowess as a narrator. Check out his long list of accomplished work on Audible.com. He is a master of pacing and cadence, morphing into multiple characters effortlessly. I personally waited until his book came out on audible.com to get the full experience of a phenomenal author reading his own work. Bravo!

This novel is based on a true story about the Navy's version of a vice squad in Newport RI after WW1. The first half felt a bit stilted and uneven, as the author introduced the main characters: William, a young, naive, straight-laced lawyer; a revered priest, accused of sexual misconduct; and the sailors who were recruited to uncover homosexuality in the Navy. I considered quitting at times, but about halfway through the book, it just took off, turning into an engaging courtroom drama, complete with surprises and moral nuance. It jumped from a 2 star listen to a 5 star listen. I was riveted for the final 4-5 hours. So, ultimately, the slow set up paid off. I am a fan of courtroom novels and history, and this novel merged the two well by the end. It was read by the author, who did a very good job.

10.5 hours of brilliance- tell your friends!

Tell me a story that flawlessly weaves all the things we think or feel about a myriad of social mores, phobias, and taboos. Add in the beautiful voice of the storyteller (who happens to also be the author!), and we have a perfect audiobook.

This story, although filed under "legal thriller", is not what I expected. No "You can't handle the truth!" No shocking twist with a surprise witness. No clever legal maneuvering by a cunning young gun lawyer. Instead, it's a story of what drives us- whether it be the lives we're born into or the ones we choose in order to escape those mistakes of birth- to do the right thing even if the right thing is following bad orders. Image conscious senior partners, vendetta-driven chief petty officers, poor Irish immigrants starving for a new life, sexually confused Midwestern boys, or men with eyes on the presidency... all make choices that lead to terrible consequences.

Then tell your friends because this book needs word of mouth review since big time bestseller list compilers forgot this one.

Have you listened to any of Victor Bevine’s other performances before? How does this one compare?

I have not read any other books but with the twists and turns of Certainty, I shall Certainly look for more of his creations. Truly a profound writer.

At first I was turned off! But as the story unraveled, I was caught up in the depth of human experience and a stark realization of how far our understandings have come in how to explain human worth. He opened my eyes as well as giving me an excellent history lesson.

I enjoyed this novel. Sympathetic characters, moral ambiguity, just the right amount of detail, and a flowing narrative. Ironically as I was reading the book I thought it would make a good movie. The author explains at the end of the book that it was first written as a movie script. This takes nothing away from the quality of the novel.

Whether intentionally crafted to gain momentum as the story unfolded, I enjoyed the pace of the novel because it picked up at certain points when I thought it was becoming a little bit dry. I also enjoyed the "gray areas" of justice that were explored. This is the kind of novel that just when I thought I knew what was going to happen it didn't happen.

What did you love best about Certainty?

Have you listened to any of Victor Bevine’s other performances before? How does this one compare?

Yes I kept wanting to get back to it.

When people have too much power

Fascinating story of a chapter in American history I've never known about. I always looked forward to getting back to this book. The characters were filled out and distinct. One of my favorites just for originality.

A Masterful Work of Genius

Absolutely... This book has the rare power to enthrall you, with many twists and turns!

The Australian John Rathom because he adds a careful balance to the plot. He fuses the ruggedness of Australia's outback with the civilized world of New England. This leads him to think "outside the box"

Victor's narration is incredible. Every character maintains a personality through careful intonation.

This audiobook caters to people interested in almost any genre. There is a character that appeals to every personality, not just those looking for a post-WWI era novel.

Based on a true story

This is a novelized version of an historical event known as the "Newport Naval Vice Scandal." It is a gripping story of homophobia and moral ambiguity that gives a valuable historical perspective on today's social polarities on gay rights.

If you're a fan of The Stranger by Albert Camus or Mother Night by Kurt Vonnegut, you will love Certainty. What keeps a listener like me engaged in these types of books is the UNcertainty of a character's integrity, true motive and overall innocence. As people we want it to be that black and white, but it is stories like this one that take you on a journey of greys. The author did a fantastic job of adding depth to each character, making you care and wonder about them from very early on. The performance, by the author as well, is unsurprisingly glorious as he is an experienced Audible narrator with many audiobooks under his belt.