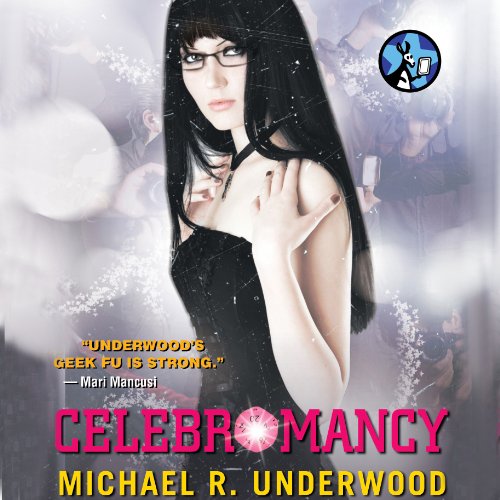 Fame has a magic all its own in the no-gossip-barred follow-up to Geekomancy. Ree Reyes gets her big screenwriting break, only to discover just how broken Hollywood actually is.

Things are looking up for urban fantasista Ree Reyes. She’s using her love of pop culture to fight monsters and protect her hometown as a Geekomancer, and now a real-live production company is shooting her television pilot script.

But nothing is easy in show business. When an invisible figure attacks the leading lady of the show, former child-star-turned-current-hot-mess Jane Konrad, Ree begins a school-of-hard-knocks education in the power of Celebromancy. Attempting to help Jane Geekomancy-style with Jedi mind tricks and X-Men infiltration techniques, Ree learns more about movie magic than she ever intended. She also learns that real life has the craziest plots: not only must she lift a Hollywood-strength curse, but she needs to save her pilot, negotiate a bizarre love rhombus, and fight monsters straight out of the silver screen. All this without anyone getting killed or, worse, banished to the D-List.

What listeners say about Celebromancy

Mr. Underwood's Geekomancy, book 1 in the Ree Reyes urban fantasy series, was a fun romp into Geekoland with some great characters and a good storyline. He takes that a step further with Celebromancy; his writing was good but now it's even better. His dialog is crisper, action more visceral and storyline more cohesive. Mr. Underwood's sophomore novel has taken a good start and improved it significantly. There are a couple of caveats when it comes to the content of Celebromancy: while it's good to see change, we went from Ree having relationships while focused on the many aspects of her life to a focus on Relationship. That shift felt fairly abrupt; the abruptness then took on a feeling of being fairly contrived to make politically correct points. I also thought that the end had a bit of over-aggrandizement of the celebromancy powers, but that's a nit. Overall, Celebromancy is a fun book that continues to incorporate the current cultural geek milieu into great lines and interesting powers.

Full of action but not quite the allure of the 1st

Yes. The reliance on pop culture makes this topical and fun.

Which character – as performed by Mary Robinette Kowal – was your favorite?

Was Celebromancy worth the listening time?

In the first book of the Ree Reyes series, Geekomancy we learn what 'geekomancy' is (the ability to manifest, for a short time, the power or attribute of anything or anyone in a movie, comic book on a trading card, etc), and are introduced to the geekomancy poster-child, Ree Reyes. In this second installment in the series, author Michael R. Underwood takes us on the next part of Ree Reyes' journey and offers up a new style of magic ... the power to win friends and influence people unnaturally (why isn't this Carnegiemancy?). And who would you most likely find wielding this power? Hollywood actors, of course.Budding screen writer Ree Reyes has sold a television pilot and is in L.A. to see her new show move from the page to the screen. Ree wrote her script using as much of her geekomancy powers as she could. But now in Hollywood, she can't help being a bit of a geek fan, despite her new street cred as the creator of a new show. High on Ree's 'geeking out crush' is Jane Konrad, an actress that Ree has long admired and who is set to star Ree's show. It is Jane who introduces Ree to the power of Celebromancy, but admits that her power is waning. Perhaps it isn't waning too much, though, as Jane and Ree begin a an intimate relationship.Life in Hollywood isn't easy, even when you have special powers, and when Jane is attacked, Ree gets directly involved to save her show and her new crush/lover.Author Michael R. Underwood has done a nice job on building on the Geekomancy foundation without simply making a repeat of the initial story. Bringing Ree into a new world and experiencing a whole new set of powers is nice. At the same time, however, I really missed some of the characters from the first book. Grognard? Eastwood? These characters were nearly as important as Ree in book one and while Grognard makes a token appearance, Eastwood is nowhere to be found. While the relationship between Ree and Eastwood was tenuous at best, they still had a common goal that was left unfinished in the last book, and I hope we'll see them working together again soon.This book is packed full of action and self-acclaimed geeks should enjoy all the pop culture references. And what geek hasn't imagined what it would be like to fire a Star Trek phaser and have it actually work, or wield a Star Wars lightsaber and really be able to cut through something (or someone)? We enjoy Ree's actions because she still thinks it's cool to do these things, to have this power. She is still a geek and we can identify with her because of this. Pushing her to this new role of screenwriter does separate her from the vast majority of geeks, though,and might endanger her credibility as someone constantly in awe of her powers and success.This volume didn't have quite the same impact as the first book had. We're no longer virgins to this territory and we want something that pushes this special ability a bit more.As with the previous book, I both read and listened to this story. I would listen to the Audible version during my commute or while walking the treadmill, and would read from my ARC at other times (usually going back to skim through what I had listened to). The narration by Mary Robinette Kowal is fantastic. Ms. Kowal clearly understands the pop culture references and she adds the appropriate energy and emphasis in her reading. In some cases, I enjoyed her reading of the book more than my own.Pop culture books seem to be getting some notice by the general reading public, as evidenced by the success of Ready Player One and even Geekomancy. Perhaps we need a new sub category designation for these sorts of books. Urban fantasy seems too generic and not quite right. "Pop fantasy" anyone?Looking for a good book? Celebromancy, by Michael R. Underwood, continues the story of Ree Reyes, geekomancer, and is full of action but doesn't quite have the allure of its predecessor.I received a digital copy of this book from the publisher, through Netgalley, in exchange for and honest review.

great book where is the next one

leverage Buffy and carmen sandiego I love this book so much. if you liked the first one this one is great. That ending though man... not sure on her relationship with drake but what can you do

if you're a geek who also like trashy tabloids...

....and lots of relationship pondering then this is for you. If you're not into tabloids and relationships...pass...I liked the first book. It was far more entertaining in my opinion...

Thank the gods they changed narrator!

If you've listened to the first book, and managed to get through the HORRIBLE reading, then try this, the narrator is leagues ahead of that reader, and makes the book interesting

The story itself is a little jumbled at times, it tries to explain the celebrities and how they live off of their fans "power", turning it into a magical element, which in some cases makes sense - how do some of them stay so young for so long? It's GOT to be magic, right?

Overall, quite a good story, a decent reading, and takes the story of Ree on a little further, and in its way a sideways look at certain bits of society use magic without the general population realising it's anything but magic

If you're into geek culture, and are a real geek, not a fake one ("look, I wear glasses, so I'm a geek"), then this will raise some smiles, but if you're not a geek then most of this will whoosh over your head so fast that you'll be lost in 95% of the book!