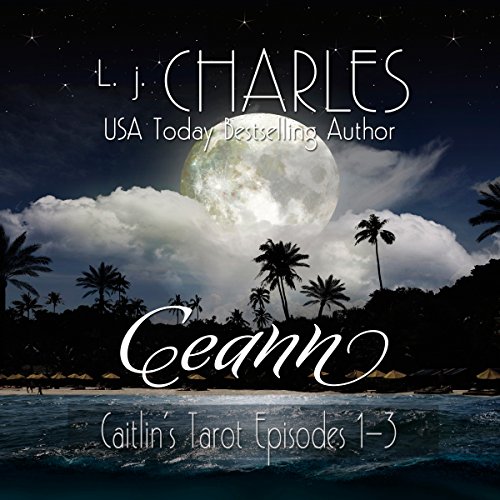 This is a bundle of the first three episodes in Caitlin's Tarot:

You can never escape from murder....

At least that's how it seems to Caitlin Connor. Blessed with funky DNA, she's able to see auras, read Tarot cards, and oh, yeah, she also packs the powerful ability to manipulate energy - the same energy that was instrumental in her mother's death.

Ready for a new beginning, Caitlin leaves her estate on the English Riviera in her aunt's capable hands, and with a hefty dose of optimism, travels to Hawaii's North Shore to practice her newly learned art of reading Tarot cards.

Day one: Caitlin is faced with her personal prophecy. Day two: she trips over a dead body and hits the Honolulu PD's suspect list. Whoever said life in paradise was idyllic didn't know Caitlin Connor.

Can she find the killer and get on with living her dream, or will her future be limited to a jail cell?

Working at the Ola Boutique wasn't in Caitlin's plans, but it provides the perfect opportunity to build a following for her Tarot readings and to search for whoever killed Ted Thatcher. Her destiny, standing for truth and justice, demands she find the murderer and free Ola Boutique's owner, Hannah Matthews, from being convicted of a crime she didn't commit.

New to working with her Wiccan heritage, Caitlin accidentally summons an apparition of Thatcher. His only message is a single word - witch. Like Hannah. And like Caitlin.

She stands for truth and justice....

Hannah is still in jail. The person who killed Ted Thatcher is still at large. And Caitlin is determined to track down the real killer, even if it means she has to join a coven.

Officer Jace Porter believes in Hannah's innocence and wants to help Caitlin, but getting involved puts him in the uncomfortable position of butting into a forbidden case - one his captain considers closed. Determined to discover the truth, Caitlin learns to use her gifts in unexpected ways, and when she's forced to confront hidden evil, she begins to accept the true beauty of her midnight energy. It's only a matter of time before Caitlin will need to unleash her power to balance the scales of justice.

Leah Frederick brings to life the quirky Caitlin in a way that no other could possibly do.
Caitlin is a wonderful character that has move to Hawaii to be closer to her cousin whom she has met a few weeks previously. As soon as she arrives, she is thrust into trouble and must figure a way out of it without unleashing her newly found midnight energy.
There are many twists and turns, enough to make you feel as if you're on an roller coaster. You will be riveted too your seat as you delve deeper and deeper into Caitlin.
Great job, Leah Frederick!!

Wonderful for your listening pleasure.

What did you love best about Ceann - Caitlin's Tarot: The Ola Boutique Mysteries?

The characters in this book are extremely well developed. They are quirky and funny and they make you feel like you are one of their good friends. The characters make me feel like I am in the book and living the story. The story is well written and has great twists and turns and a bit of magic and romance thrown in, too. What's not to love?!?

The plot kept me on the edge of my seat! Every time I felt like I had it figured out, Ms. Charles would throw a new twist into the story. Loved it!

Have you listened to any of Leah Frederick’s other performances before? How does this one compare?

I haven't listened to any of Leah Frederick's book, but her performance was wonderful. She captured the accents and attitudes of the characters wonderfully.

I didn't want to stop listening to it. In fact, I lost a lot of sleep because I wanted to see what was going to happen next.

This is a wonderful book by and incredible author. Everything that I have read and now "listened" to, have been wonderful. You can't go wrong with any of L.j. Charles' books. I'm so glad that she now has the Audible Books.

If you are not into new age magic themes then this book may not be for you. That aside it is a good well performed murder mystery with some humorous moments. The narrator is perfect for the main character and heroine.

Caitlin is newly arrived in Hawaii and on her first day befriends a Wiccan boutique owner and then literately bumps into a body. Caitlin's new friend has been framed for the murder and Caitlin sets out to prove her friend's innocence using her magical gifts.

The moral of the tale is beware of a woman scorned especially if the woman is a crazy witch.

Where does Ceann - Caitlin's Tarot: The Ola Boutique Mysteries rank among all the audiobooks you’ve listened to so far?

Ebba. Brought a calming effect to my spirit.

Liked the English accent. Didn't like the high pitched sound of her voice.

Enjoyed when Ebba walked Caitlin through her powers and calmed her down.

Appreciated the minor use of swear words. Thank you.

I didn't read the description of this book or I probably wouldn't of requested it. I did listen to it and for its genre , it was OK. I liked the comparisons between American English and European English phrasing.

The narration was well done, The characters were excellently portrayed.