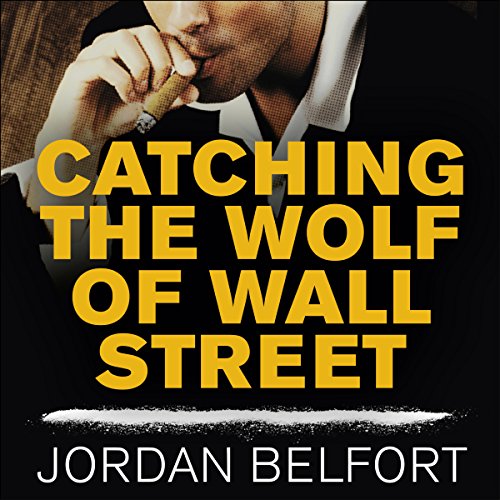 Catching the Wolf of Wall Street

By: Jordan Belfort
Narrated by: Ray Porter
Try for $0.00

Listen to what happened next in the follow-up to the best-selling The Wolf of Wall Street, now a major motion picture directed by Martin Scorsese.

In the 1990s Jordan Belfort became one of the most infamous names in American finance: a brilliant, conniving stock chopper. He was the Wolf of Wall Street, whose life of greed, power and excess was so outrageous it could only be true; no-one could make this up! But the day Jordan was arrested and taken away in handcuffs was not the end of the madness.

Catching the Wolf of Wall Street tells of what happened next. After getting out of jail on $10 million bail, he had to choose whether to plead guilty and act as a government witness or fight the charges and see his wife be charged as well. He cooperated.

Praise for The Wolf of Wall Street: "What separates Jordan's story from others like it, is the brutal honesty." (Leonardo DiCaprio)

"Reads like a cross between Tom Wolfe's Bonfire of the Vanities and Scorsese's Goodfellas.... Laugh-out funny." (The Sunday Times)

What listeners say about Catching the Wolf of Wall Street

A brilliant book only topped by the narrators performance

If they have audio book oscars, Ray Porter would sweep the board for his performance in this book

I’m a fan of the original book and the film. I bought this not really sure of what it would be and how the story could be expanded but was pleasantly surprised. Belfort is a great story teller and I found this book as interesting as the first. The narrator is 1st class, one of the best I’ve heard on audible and made this book a joy to listen to.

Catching the Reader of This Book

Catching the Wolf of Wall Street kept me captive under its incredible, over-the-top stories and inner voices. It gives the reader/listener a rare peep into the American white-collar crime scene and the judicial system and how some people are treated against other types of criminals.

This book was an absolute pleasure to read. Jordan Belfort’s style of writing (as explained in the epilogue) is on two sides of the spectrum.

Jordan shows signs of self-awareness and part of you can empathise with him, but also dislike many parts at the same time.

Ray Porter’s reading performance was absolutely perfect, with a huge array of voices, accents and enunciations that sounds very much alike to the way Belfort actually speaks.

This is one of those books that will have me thinking for a long while, and I hope that one day Jordan Belfort will write another book, a follow on from this about his road to ‘redemption’ (if you can call it that).

Not a patch on Wolf of Wall Street

I felt that this book was more about Jordan Belfort squeezing the sponge of his infamy to get the last dollars out of his story. The writing style mixes humour and intrigue, but if you remove the style and voice the content is not particularly interesting. If Mr Belfort really wants to redeem himself maybe he should go out and meet the people whose lives he ruined with his greed and write their stories?

Well worth a listen.

If you've seen the film, you have got to listen to this. A great insight to Jordan's life before and after being caught. Narrator is excellent and story telling keeps you wanting more.

Un-fudging-believable!!! You must listen to this. It is mind blowingly good! Wish it was a trilogy

Amazing insight and rare glimpse into the life on the other side of the glitz and glamour.

actually better than the movie!

The story was Epic, a crazy life of complete ostentatiousness, doing literally anything his heart desired, a crazy story and a good narrator. id encourage anyone to watch it if you enjoyed the movie. the first half of the book is quite similar to the movie, but the second half is where the movie narrative diverges from this actual story. overall highly recommend it. my only gripe is that the sequel has a different narrator!.