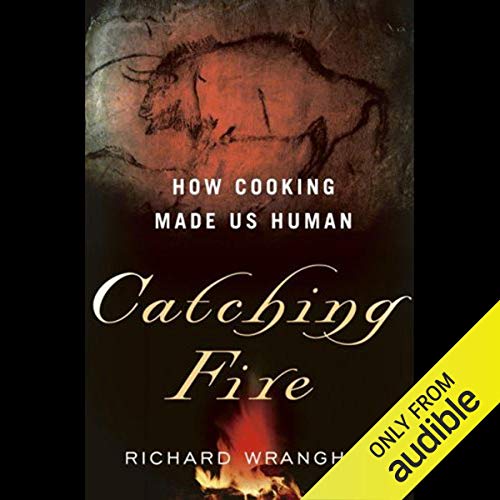 By: Richard Wrangham
Narrated by: Kevin Pariseau
Try for $0.00

Ever since Darwin and The Descent of Man, the existence of humans has been attributed to our intelligence and adaptability. But in Catching Fire, renowned primatologist Richard Wrangham presents a startling alternative: our evolutionary success is the result of cooking.

In a groundbreaking theory of our origins, Wrangham shows that the shift from raw to cooked foods was the key factor in human evolution. When our ancestors adapted to using fire, humanity began. Once our hominid ancestors began cooking their food, the human digestive tract shrank and the brain grew. Time once spent chewing tough raw food could be used instead to hunt and to tend camp. Cooking became the basis for pair bonding and marriage, created the household, and even led to a sexual division of labor.

Tracing the contemporary implications of our ancestors diets, Catching Fire sheds new light on how we came to be the social, intelligent, and sexual species we are today. A path-breaking new theory of human evolution, Catching Fire will provoke controversy and fascinate anyone interested in our ancient origins - or in our modern eating habits.

What listeners say about Catching Fire

Why is it that people who shouldn't be reading are reading? Another interesting subject spoilt by poor delivery. I am not sure what's the original accent of the narrator, but it feels as though his voice has been out through a filter, creating a monotonous performance of dubious pronunciation.

Prof. Richard Wrangham has written several brilliant books on comparative anthropology, and comparative psychology, but this has to be the best. Further, it is excellently read by Kevin Pariseau, which only enhances the arguments and the content. In the end I had to buy the book as well, to refocus on elements of it for my teaching, but that is not to decry the audio book. An excellent antidote to the sad dismissal of cooking as a domestic task in 1970's feminism, and a part explanation for the fascination with competitive cooking on TV - highly recommend.

Very interesting evolutionary perspective on food and cooking. It hypothesises that over our evolution we have been cooking food for a lot longer than previously thought and how this has effected humans over time.

Fascinating exploration into how cooking changed our evolutionary path and potentially led to a gender divided society.

The basic premise of this book is false. The whole enterprise is ideologically motivated. The story is interesting but misleading. What made us human was animal fat - especially marrow and brains. Please read Miki Ben-Dor's Man the Fat Hunter instead.

The main idea that the book is trying to communicate is put forward quite well by this book, although you probably get the message after the first chapter or two. It kind of labours the point after that. The comparisons between the digestive systems of humans, our ancestors and other primates I thought was particularly interesting.